Inside the matchup Seahawks vs. Jets 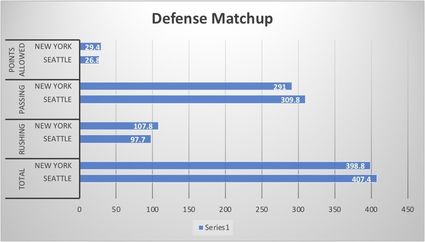 After an upset loss to the New York Giants last week, the Seahawks have dropped down to the fifth seed in the playoffs. If the Seahawks end the season as the fifth overall seed, they would have to travel to New York for a rematch against the Giants in the first round of the playoffs. The December 27th game in Seattle against the Rams will likely determine the NFC West division winner this season.

This week the Seahawks host the New York Jets. The Jets are now 0-12 on the year after a last-second loss last week against the Las Vegas Raiders. How do you go 0-12 to start a season? Well, several things have to go wrong. Splitting time between two quarterbacks is a good start. Sam Darnold and Joe Flacco have played at least five games each for the Jets and combined have more interceptions (12) than touchdowns (11). The Jets have also had two kickers, Sam Ficken and Sergio Castillo, both have had reliability problems. As a team on offense, they rank last in total yards per game, passing yards, and points. They have allowed almost 30 points per game on the defensive side, with only the Lions and the Cowboys giving up more points per game. The Jets punter Braden Mann has more total yards punting the ball than the Jets quarterbacks have throwing it. That’s how you start a season 0-12.

Jamison Crowder is the Jets’ top receiver this season. He leads the team in total receptions with 40 and yards with 503. Breshad Perriman is the number two option for New York. Both receivers have played in only eight of the teams’ twelve games this season.

At running back for the Jets is Frank Gore. He has 523 yards so far for the Jets. If you’re thinking, ‘didn’t the 49ers have a running back named Frank Gore back in the mid-2000s?’ You are right; it’s the same guy. Remarkably, Gore, now 37 years old, is in his sixteenth season as running back, having played 238 games. He is currently third on the all-time rushing list behind only Emmitt Smith and Walter Payton. Gore is only 130 yards away from reaching a total of 16,000 rushing yards for his career. He is not likely to get that this week against the Seahawks but should reach the milestone before the season’s end.

Here is the current injured list for the Seahawks. The players listed as out for this week are Brandon Shell OT, Travis Homer RB, Cedric Ogbuehi OT, Ryan Neal CB, and Jamarco Jones OT are listed as questionable after injuries sustained in the Giants game.