Truth Seekers, The Aliens, and a little Jingle Jangle for good measure 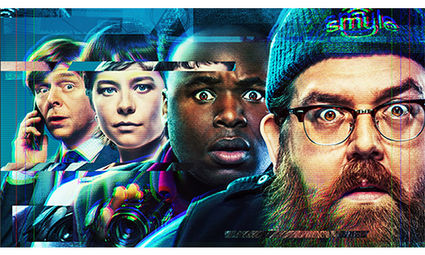 For longtime fans of Simon Pegg and Nick Frost, the Amazon original Truth Seekers (2020) is a welcome reunion with a whole new story. There’s more than meets the eye with cable installer Gus Roberts (Frost); he’s also a part-time paranormal investigator with a YouTube channel. Odd encounters grow more frequent until Roberts and his apprehensive partner, Elton John, begin to uncover a conspiracy that could bring about Armageddon for the entire human race. In the meantime, network signal strength is a priority. It’s designated a horror-comedy series; however, it’s more spooky than truly scary (very little violence, gore).

The Aliens (2016) is just what to put on when you’re in the mood for a high-octane adventure. No shortage of violence there. It blends science fiction, drama, and comedy effortlessly into a whole new genre: Scifamedy. There’s a wonderfully dry wit to the dialogue. The story takes place in an imagined Britain where aliens have lived amongst humans for 40+ years. Though they appear similar to humans, the extraterrestrials are segregated by a wall which forms the slum city of Troy. Guarding the wall is Lewis, who takes his job quite seriously until his own alien heritage threatens everything. With setups, shoot outs, and alien drugs, this series has it all.

Is it too soon to discuss holiday movies? Once upon a time, I worked in a fast fashion retail store in downtown Seattle. Beginning November 1st, they would blast not just any Christmas music, but hyper electronic dance remixes of Mariah Carey’s Christmas.

From this experience, I gained the ability to tune out the retail industry’s earlier and earlier beckonings of the holiday shopping season. I smell no cinnamon brooms, I hear no sleigh bells, I play no reindeer games. I don’t get the slightest inkling until Thanksgiving Day. That’s when my family traditionally puts up the decorations, probably to keep us, kids, out of the kitchen. Moms are genius planners that way.

So, if you, like me, are finally ready to turn your attention to all the advent calendars, candy canes, and cheer staring us down in grocery aisles for weeks, might I suggest navigating to Netflix’s Jingle Jangle: A Christmas Journey. It is a musical. Okay, I admit, my interest in musicals began with Grease, peaked at Rocky Horror Picture Show, and fizzled out at Chicago. Sure, I was there for Sweeney Todd: The Demon Barber of Fleet Street and Hamilton: an American Musical, but I was only going through the motions on these subjects of lucrative cannibalism and founding fathers, respectively. A holiday musical makes sense because we are two notes from singing carols anyway.

Jeronicus Jangle, an inventor and toymaker, once betrayed by his apprentice, finds new hope when confronted by his granddaughter, Journey.

Jingle Jangle also works because of the painstaking attention to detail in talent, set design, and especially in the costumery. The combination of animated, stop-motion style storybook sequences and live-action invents and then reinvents each character. Characters are portrayed by an all-star lineup of celebrities, including Phylicia Rashad, Forest Whitaker, Keegan-Michael Key, and Ricky Martin. The songs are meaningful, and the movie could warm any heart, even the scroogiest scrooge.