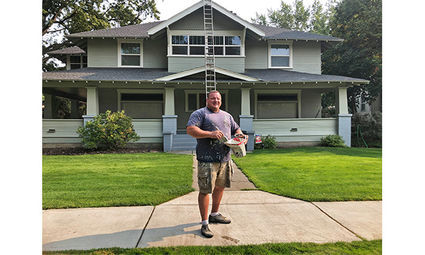 Jason Gillen, owner of JLG Painting and an avid strength sports athlete, stands in front of a recently-painted home.

If you drive down Main Street Waitsburg, you'll see a cute pink house with white trim. That little house is one of many that Jason Gillen, owner of JLG Painting, has finished in the area. While 'professional painter' sits at the top of Gillen's resume, 'powerlifter/strongman' follows in a close second. Gillen has been into weight lifting since a young age, saying that it is a hobby as it is a lifestyle.

"I got my first pair of barbells from my dad. I was, oh, seven or eight years old," Gillen said. "I still have those weights today. By the time I was in sixth grade, I could bench press 100 pounds, and I worked on bench press quite a bit. Then my teenage years came, and I discovered Arnold Schwarzenegger and pumping iron and all of that."

Gillen joined his first bodybuilding gym when he was 15 years old, inspired by Schwarzenegger. In his early 20s, he discovered powerlifting. Powerlifting is a strength sport that consists of three attempts at maximum weight on three lifts; a squat, a bench press, and a deadlift.

Gillen worked on rounding out his lifting routine, perfecting the weight lifter's diet, and began competing in the World Association of Benchpressers and Deadlifters. He quickly began breaking deadlift records and bringing home prizes.

After moving to Walla Walla, Gillen began competing in the annual Athena Caledonian Games in Athena, Ore., each year. While the origin of highland games predates recorded history, one of the first notable events was held in the 10th century, during King Malcolm III's reign. The Scottish king organized a race up Craig Choinnich, and the winner would become Malcolm's foot messenger. It is argued that the games were originated to test of soldier's strength with heavy lifting events. The games celebrate Scottish and Celtic culture and have become symbolic across the world.

One of Gillen's good friends, Ed Coan, is regarded as the greatest powerlifter of all time, having set over 71 world records in his career. Even in his 50s, Coan remains a huge influence in the sport. His story is similar to Gillen's, in the sense that he started at a young age, and worked to be the best he could be, all the while remaining humble and positive.

"It's something I really appreciate about the sport," Gillen said. "It's not about outdoing anybody. It's a very positive, supportive group. Everybody wants to see everybody else do really well."

Currently, Gillen is not training as hard as he once did, but he says he plans on doing it as long as he lives. He enjoys competing and training but says that ultimately powerlifting is his hobby, and he simply enjoys the community that exists within the sport.

Strength sports are nothing new. Their roots stretch back as far as Greek and Persian times, and weightlifting has been a recognized Olympic sport since 1896. During the 1950s, the United States saw a decline in Olympic weightlifting as many athletes did not like the three recognized lifts; clean and press, snatch, and clean and jerk. In 1958, the Amateur Athletics Union began recognizing weight records for odd lifts, and in 1964, the first national weightlifting competition was held.

The sport has a good edge on inclusivity. Various forms of weightlifting have been a part of the men's Paralympics since 1964, and in 2000, women were invited to compete in weight sports at the Sydney Paralympic Games. Today, women compete in all ten components of recognized Paralympic strength competitions.

If weight sports are something you're interested in, Gillen said he highly recommends the trainers at the Muscle Shack, in Walla Walla.

"They have a very supportive powerlifting group, and strongman community," he added. "The owners are very, very positive, and excellent trainers. Talk to Nate or Greg. Allison is great, too!" The Muscle Shack is located at 1519 E Isaacs in Walla Walla.

Gillen has been featured on the Muscle and Motivation podcast and shares lifting videos on his YouTube channel, Jason Gillen's Powergym. He has traveled the world, competing at local, state, and national strength sports competitions. Meeting people has been one of the best parts of competing in strength sports, Gillen says.

"It's not for everyone," Gillen added. "But the ones who do it, we can't live without it."