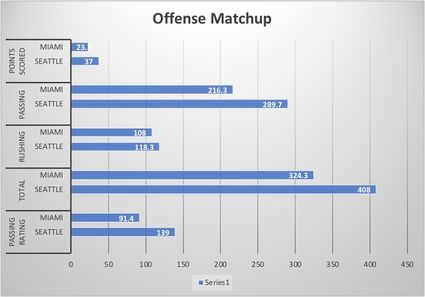 The Seattle Seahawks find themselves in first place in the NFC West with a perfect 3-0 record. This week they travel to Miami to face the 1-2 Miami Dolphins. This should be an easy win for Seattle even though Seattle is currently ranked last on defense in yards allowed per game and passing yards allowed.

At quarterback for Miami is Ryan Fitzpatrick. Fitzpatrick is with his eighth team and is playing in his sixteenth season in the NFL. He has a career record of 56-85-1, and his 2015 season with the Jets was his only winning season. This season, Fitzpatrick is having his best year, completing...