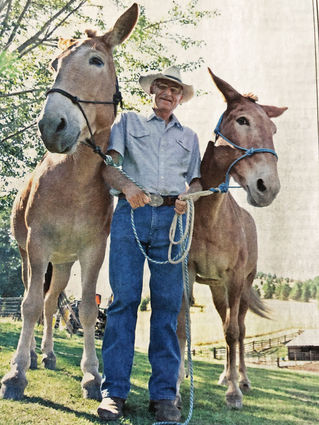 [Photo caption] Daytonite Doug Krueger at his ranch with his mules Kate and Belle. The mule enthusiast has participated in team roping contests at the Hell’s Canyon Mule Days in Enterprise, Ore., and was instrumental in introducing the owners of Coyote Mule Company Dayton’s attribute as an event venue.

The Columbia County Regional Health Foundations, a non-profit charitable corporation based in Dayton, recently announced a $4,000 donation to the Waitsburg Ambulance Service for the purchase of a new defibrillator.

[Photo caption] Barbara Mulvey, the past madam president of the Auxiliary of the Fraternal Order of Eagles in Walla Walla, announced this week that the Eagles were donating $500 to the Weller Public Library in Waitsburg.

Members of the U.S. Army Corps of Engineers will lead a public tour of the Palouse Canyon Archaeological District.

Andy Winnett, 38, of Waitsburg, the school district’s maintenance chief, is leaving for a teaching position at Walla Walla Community College. The district is now seeking a replacement. Winnett starts Oct. 23 as an instructor in the John Deere Ag Tech program, where he will teach tractor repair.

A happy new Wheat Queen and two happy parents were present at the Wheat Growers meeting Monday evening in Walla Walla. Peggy Fulgham, a Wa-Hi student was selected to represent Walla Walla County in the district Wheat Queen contest. She is the daughter of Mr. and Mrs. Richard Fulgham who farm near Dixie.

The Waitsburg price on wheat as of Wednesday, October 14 was $1.46 per bushel. Touchet Valley Grain Growers Manager John Egli reported that a sale of some 75,000 tons to India plus some 40,000 tons to Japan has had the effect of strengthening the market.

Sunday, October 18, will be an extra special day for the membership of Waitsburg’s First Baptist Church. Terry Hiatt, who recently became the church’s pastor, will be fully ordained to the Gospel Ministry in a special service at 3 p.m. in the church auditorium. The public is cordially invited to attend.

Mr. and Mrs. Larry Broom and daughter are moving to Waitsburg this week to make their home.

The Touchet Valley Grain Growers reports a large quantity of wheat being sold during the past ten days, with farmers receiving an average price of $1.40 per bushel or better, according to grade.

Richard Donnelly has received his discharge and plans to make his home in Waitsburg. He has 35 months overseas duty.

In a listless game, the local Hi team defeated Washtucna at the latter place last Friday, 39-0. The only thing to mar the game was the dust, and the inability of the crowd to realize a true sportsman’s spirit.

J.W. Sweazy and family returned this week from a visit to Portland. J.W. recently purchased a Dodge sedan and the trip was made in the new car.

Claude Paine aged 17 years and whose home is in the classic hills at the foot of the Blue Mountains above Dayton and Miss Tura Williams of Dayton, aged 17, eloped last Saturday evening and hid themselves away to Lewiston, the “Gretna Greene” of the Northwest, and now there is weeping and wailing and gnashing of teeth among the girl’s parents.

While James Yeend was cooking dinner over a campfire on Thursday of last week, his patented coffee pot exploded and scalded his face terribly and almost put one eye out. Some of these labor-saving machines are not what they are cracked up to be.