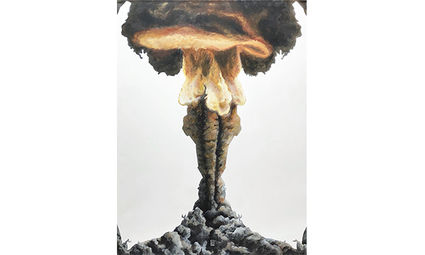 WALLA WALLA-Walla Walla native, Brandon Hallsted, wears many hats. By day he is an entrepreneur who owns Connor's Flooring and Design. As past president and current board member for ArtWalla, he's an effective leader. He has spent the last 22 years as a husband to his beloved wife, Mandy. And, this month, Hallsted dons the Combine Art Collective featured artist hat.

Beginning his art years ago with sketches, pastels, and painting, Hallsted pursued technical skills that garnered him a bachelor's degree in civil engineering as well as studying Interior Design. As a self-proclaimed 'idea-guy' and conceptual artist, he works in multiple creative fields.

The body of work he's produced for Combine's featured artist exhibit, titled "2020, One Nation in Division," is indicative of a deeply patriotic pull through ancestral ties to the beginnings of the American experiment. This is portrayed with sketching, graphics, mixed media, color development, scaling, presentation, and symbolism. He says, "it allows him to present a visual conflict to the viewer; I relish the viewer's long pause and fist-to-chin posture surveying the meaning in the piece."

This exhibit expresses the paradox of colonialism's forceful settlement and expulsion of native occupants while claiming a divine manifesto that has always stained Hallsted's sense of patriotism.

Delving into the New World history in this exhibit reveals a constant theme of division and aggression, which has evolved over time.

Hallsted's politically-charged artwork is based on his frustration that "in recent years, there has been a distinct extremism moving to the core of politics, tricking Americans into believing that their choice of political representatives must be for one side only, with absolute opposition to the other. Anti-Americanism is now marketed as the consequence of being somewhere in the middle, politically."