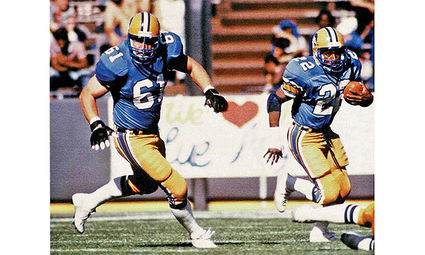 Starbuck School District Superintendent Kevin Graffis is pictured next to Arthur Whittington (carrying the ball) when he played football for the Oakland Invaders in the United States Football League, in 1983, and 1984.

STARBUCK-The first thing you notice when you meet Starbuck School District Superintendent Kevin Graffis is what a big man he is. Graffis has played professional football, and as he begins to talk, his love of sports comes across.

Just two years into his first teaching job in Bridgeport, Wash., he was tapped by the San Francisco 49ers to play professional football. He said he played two preseasons with the 49ers but didn't make the final cut; and ended up playing in the United States Football League with the Oakland Invaders.

"What an experience that was," he said.

Graffis said he is already feeling wistful about retiring.

Sports, particularly basketball, will figure into his retirement plans.

He is thinking about publishing an online version of Duke University Basketball star Dick DeVenzio's book Basketball for Little Kids 7 Feet and Under. He received permission from DeVenzio before he passed away in 2001.

Graffis said he also hopes to be able to provide a "strong voice" for the smallest school districts, those with fewer than fifty students because they have issues that are uniquely theirs.

Graffis would like for small school teachers to have more opportunities for professional development.

He belongs to the Blue Mountain Small Schools Consortium, and this group of superintendents is looking into creating a convention just for those teachers.

This is Graffis' second retirement from his long career in Education.

The first was in 2015 when he retired from the Lewiston School District as an elementary school principal.

His retirement lasted about a year. He said he was assisting as an elementary principal in Colton, Wash., where he lived when the opportunity arose to try his hand at being a superintendent. He took a half-time position at Dixie Elementary School and then added a half time position with the Starbuck School District into the mix. When the commute from Colton became too much, he cut back to Starbuck, alone.

Graffis said he and his peers in smaller school districts rely on qualified staff to manage things on the days they are not physically at school. This practice represents a cost-saving for the districts.

He is currently commuting to Starbuck, about once a week from Colton, and he will do so until he retires on Dec. 31.

Graffis had nothing but nice things to say about his successor, Gerry Grubbs, who lives in Olympia, and has been popping in at school, once a week to familiarize himself with the staff, parents, and students in the Starbuck School District.