News from the Dayton Chamber of Commerce

Brix and Brew will be virtual 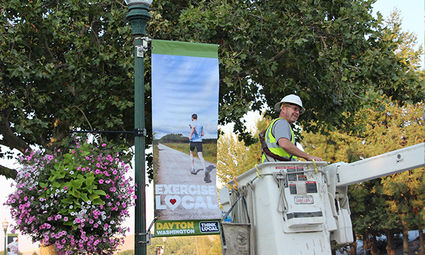 Pacific Power lineman, Doug Hines, hung "Think Local" campaign banners along Dayton's Main Street at the end of last week. Each of the 44 banners features a verb, plus the word "local," representing the many opportunities Dayton and the local area offer. The banners were paid for by the Dayton Development Task Force featuring the photography of Ray Brown, Brian Graham, Scott Kirk, Annelise Page, Nick Page, and Vicki Zoller. The "Think Local" campaign coincides with a series of videos produced by the Elkhorn Media Group promoting Dayton's history, business, and recreational opportunities. The videos are on the Dayton Chamber's Facebook page and will be on the Chamber's new website in the next few weeks.

DAYTON-Dayton is becoming a magnet for people who are attracted to the rural lifestyle.

Dayton Chamber of Commerce Manager Molly Weatherill-Tate said a couple from Colorado recently moved to Dayton, and a man from western Oregon is thinking about moving to Dayton when he retires. Another family moved to Dayton sooner than they had planned to, because of the COVID-19 situation, and she has sent relocation packages as far away as Missouri, California, and Texas.

"People generally seem to be attracted to the rural way of life and getting away from the hustle-bustle of cities," she said. "Our r...