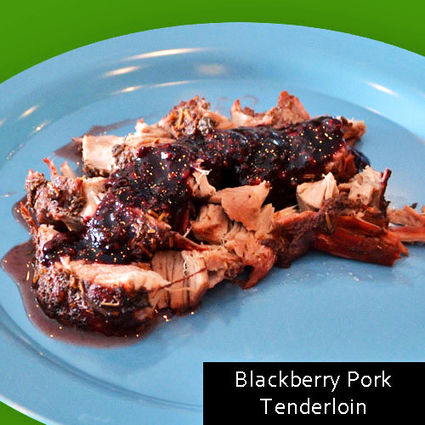 This caught my eye so I decided to make it. I’ve never picked blackberries before. I asked my friend if she had them on her property. She said she had lots and be sure to wear long sleeves and jeans. I had heard they were stickery, and discovered it was an understatement. The thorns were more like knives. We picked for over an hour and guess what?!! She shared her bounty with me. It’s a good thing as I’m not sure I had enough for my recipe. 

½ c. dry red wine-same as above

Season the pork tenderloin on all sides with salt, pepper, sage and rosemary. Place the tenderloin into a slow cooker and spoon the blackberry jam, ¼ c. honey, and 2 tablespoons of red wine over the pork. Set the cook to low and cook until very tender, 4 to 5 hours

About 15 minutes before serving time, pour ½ c. red wine, 2 tablespoons of honey and the fresh blackberries into a saucepan. Bring to a boil over medium-low heat and simmer until sauce thickens slightly and some of the blackberries burst, about 15 minutes.

Several things: I didn’t have sage. When I went to the store, I got the roast, seedless blackberry jam, and looked for the sage. At $7 for a small jar, I decided to see what else would work. If I make it again, I’ll splurge and get the sage. I found a jar of poultry seasoning that had sage in it, but the sage flavor didn’t come through very strongly.

We had boxed Merlot. If you need to borrow some, let me know. 

I decided to sear the meat and put it in a slow over. I baked it at 300 for almost three hours. In hindsight, it should have been 250 for three hours. The roast was large so if you use a smaller tenderloin, I would use less time, or use the crock pot.

I added the jar of jelly. It felt like a lot. Baking the roast made quite a bit of juice and the jelly disappeared into it. One of the reviews used the juice in the sauce. I’m not sure if they substituted the wine for the juice. In hindsight, since the juice has the seasonings and the jelly, I think I would bake (or crock pot it) until almost done, take some of the juice out, then add the jelly. I think it would keep more of the jelly flavor.­—A thought.

I would make twice as much sauce and I added a bit of sugar, but that is a preference.

We saved the juice from the pan, since there was quite a bit, to see if we can reuse it.

When served, it looks like an entrée from an expensive restaurant. I made mashed red potatoes with the skins on and added green beans.

ENJOY. The recipe came from All-Recipes if you want to read the reviews.