An interview with Troy Larsen 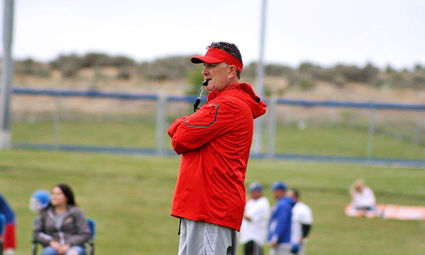 Head football coach Troy Larsen was kind enough to talk to me this past Sunday evening about the upcoming high school sports year. What follows is part of our conversation.

E.U. – Do you have any idea how many might be coming out this year for football?

T.L. – I do not. We didn’t have spring football, so usually, that’s a barometer. And then I get to see all the freshmen that are coming up. We missed out on all of that, and without school, I wasn’t able to have my spring meeting with all the kids. We are kind of sitting here up in the air. It would be nice to know.

T.L. – We were up and around thirty-two to thirty-seven at different times. We had a good group last year. Graduated eight seniors, so I’m expecting we will have at least thirty out this year.

E.U. – Yeah, I thought things started to come together for you late in the season.

T.L. – Yeah, we started playing so much better and started to figure it out. So, I mean, this is just a gut blow. The kids were so excited about spring football, and it never happened.

E.U. – Does the Safe/Start phase we are in have anything to do with when football can be played and what it is going to look like?

T.L. – No. The State of WIAA (Washington Interscholastic Activities Association) executive committee came to some conclusions a couple of weeks ago, and they went to a four-season year. The first season was supposed to start in September.

That would have been like cross-country, diving, and maybe competitive cheerleading. A couple of the sports like slow-pitch softball got moved back to season three. Football and volleyball got moved back to season three. There is nothing in season one that would have been the normal fall sports. Season two will be basketball and wrestling, and those will start in January. They get January and February for their season. Season three will be football, volleyball, cross-country. That will begin in March and April. But because football is a different sport with contact, we can start practicing February 17 if our county is in phase three.

E.U. – Has there been any talk of playing without fans depending on restrictions from the State’s Safe/Start program?

T.L. – We have not heard any of that to this point yet. So far, they just put together the seasons if we can get to phase three by the end of September. There is a no coaching period now through September 27; starting September 28, they might allow offseason practices. So like spring football, our summer programs might be able to have a November/December season. It would end on December 30. It would be September 28 to November 30 could be an offseason coaching period, but again you’ve got to get to phase three.

E.U. – Have you spoken with any of the coaches from the other schools about scheduling?

T.L. – No. What we’ve done so far is because of the shortened season. It typically would be seventy percent of the season. You figure you would wipe out your pre-season games and go just for the league games, and we would probably get six or seven games. All that still needs to be figured out.

E.U. – You would still have games against teams from the local counties (Walla Walla, Columbia), correct?

T.L. – Yeah, the way it is set up right now is Tri-Cities/Yakima are the other two counties where our other teams are from, and they are way worse off than we are. Everybody is a little different based on what phase they are in.