The quilt will be raffled on "Ladies Night Out" in December 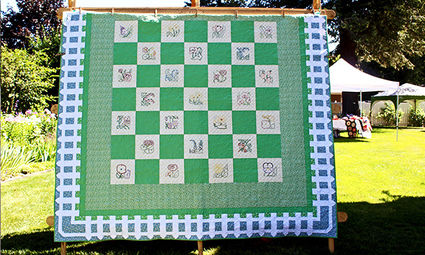 It's not too late to enter the drawing to win "The Flower Garden" quilt, which was on display at last months' show "Quilts in the Garden," at the Boldman House Museum.

DAYTON-In a diary entry dated March 5, 1933, Marie Boldman mentions making the "Flower Garden Quilt," similar to the raffle quilt, which was on display at last Saturday's quilt show at the Boldman House Museum.

Sylvia Beuhler said Marie Boldman saved quilt patterns from newspapers during the 1920s and 1930s. Ruby Short McKim published the "Flower Garden Quilt" pattern, sometime in 1929 or 1930. The Spokesman-Review published in their newspaper between 1930 and 1933 and Boldman saved it.

"She was an excellent embroiderer, and she embroidered most of that type of quilt in the Boldman Collecti...