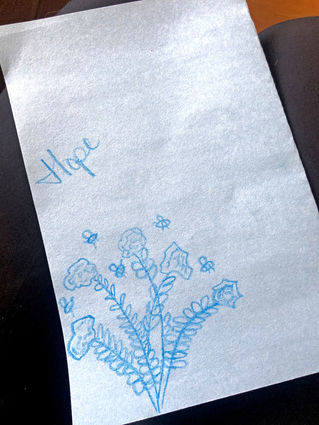 My not-so-artistic rendition of the oregano bush in my garden. At the time, it is full of bees and other pollinators, which represented hope.

WAITSBURG-Sometimes, sitting down and reconnecting with familiar faces can heal beyond recognition. As a born 'people person,' the quarantine has been especially difficult for me. A couple of weeks ago, a little bird told me people were setting up camp in front of Waitsburg's post office, and the little bird encouraged me to pop down and talk to them.

I discovered Mike Ferrians and Maria Garcia hanging out in the shade, with a table full of crayons, colorful construction paper, and a handful of safely-distanced chairs. Ken Taylor even offered some live music, strumming away on his mandolin while thoughtfully listening in to the conversation.

Now, for those who have never met Maria or Mike, they are some of the most creative, caring, personable people I've ever known. My history with the two stretches back well into my childhood, so when I saw the two of them armed with crayons and paper, my first thought was 'what in the world do they have planned,' and my second thought was 'Go, talk to them right now.'

Before we even had a chance to make the connections of who everyone was, Mike handed me a piece of paper and asked me to draw what hope meant to me. 'The first thing that comes to mind,' he said, and I froze. I thought about the state of the world right now, plagued by a relentless new virus, jobs lost, people hurt during protests, the fight for equality... things are scary. I couldn't pinpoint one thing that represented hope on that large of a scale, so I dialed my thoughts back to home.

At the time, my oregano bush was in full flower, and for some reason, that popped into my mind. After making a rough sketch (emphasis on rough), I explained what I had drawn.

That's when Mike hit me with the 'why.' Why did I think of my oregano flowers? Why does a flowering herb represent hope? Mike was making me think in a way I hadn't for a long time, and it took me a minute.

I chose my oregano bush as my subject because of the bees and other pollinators that were loving it. Bees are underappreciated workers that promise us a colorful and fruitful future. Without bees, we lose flowers, fruit, vegetables, forests, prairies, farms, and one of my favorite foods, honey. Bees have overcome a variety of natural and man-made challenges including pesticides, invasive species, predators, and now giant murder hornets, to keep giving us beauty, sweet treats, and life itself.

Bees are the ultimate representation of hope. As long as we have bees, we have a future, and as long as there is a future to look forward to, there is hope.

The bees led up to the next part of the conversation. They asked how world events are affecting me today. Not the over the past four months, not for the foreseeable future, but today-right here, right now. I think they were expecting a focus on negativity, but I have had enough of the dark perspective on things. I have tried to look at all the good the quarantine has done for me.

My mask, for example, has pushed me to explore ways to deal with my claustrophobia. While therapy probably would have been the healthier option, my mask has taught me to ground myself and remind my anxiety that it is just a mask. I can breathe, I am in control, and I will be fine. The mask, to me, represents something that so many people dig their heels in against, and understandably so because it is scary. If there is one thing the mask has taught me on a broader scale, it is to normalize change.

The entire conversation lasted about an hour, and our responses offered everyone involved new perspectives. The most enjoyable part of the conversation was that Mike and Maria did not sit down and look for an argument or pass judgment on others. It was conversation without predisposed emotion, without locked perspectives or expectations. It was a breath of fresh air for someone who has struggled so hard to hold conversations with anyone lately.

Mike and Maria are planning on having more of these Main Street chats, and I imagine each will be as thought-provoking as their first. The neutral tone of the conversation was a relief. Being able to talk about sensitive topics without a fight opened my eyes to so many things that I had been unknowingly ignorant of.

Conflicting thoughts and ideas are necessary to the process of moving forward. Still, it is a struggle to recognize that opposing ideas are okay and that we really do need them as individuals and as a society. Keep an eye out for Mike and Maria, and their table of whatever supplies they think up. Pop by, say hi, and embrace the simplicity of conversation with neighbors who only want to listen and support their community.