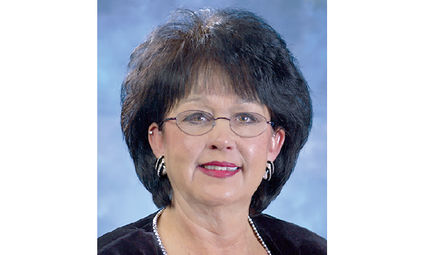 DAYTON—This week, Bette Lou Crothers is wrapping up a forty three-year career as an insurance agent in Dayton.

Not to worry, our Town Mother is not leaving us.

“I’m still going to be downtown bugging everybody, doing All Wheels and Christmas Kickoff,” she said.

There is nothing retiring about this hard-working Dayton booster.

In high school and during college breaks, Crothers worked at Dorsey’s restaurant waiting tables. After she and Gene Crothers got married and began raising a family, she caught on at the local cannery during the summer months, to make a little extra money.

When she decided to look for other work, she applied all around town and was contacted by Wally Payne to consider working in his insurance office.

She told him she didn’t know anything about insurance.

“I can teach you insurance,” he said. “I can’t teach you work ethic.”

Crothers said she bought some work slacks at Dingle’s and went to work the following day.

“I kind of recognized it as a door of opportunity for my husband and me,” she said about transitioning into full-time work with State Farm.

Crothers said when she first became an agent, and she was “totally” guided by hopes of financial riches, what she found, instead, was a real joy for the job at hand.

“Insurance is hard because sometimes people aren’t happy,” Crothers said. “But there is nothing like handing a farmer a check when their crops didn’t quite make it or standing there when their house is on fire, and holding their hand, and telling them it’s okay, we’ve got help for you.”

Crothers said the decision to retire wasn’t an easy one to make.

State Farm promised her they were committed to keeping the State Farm agency in Dayton open, because of the longevity of the business here and the loyalty of the policy-holders.

Mike Stensrude, the State Farm Contract Agent in Walla Walla, will oversee the Dayton office until an intern is assigned and contracted to take over.

“I didn’t want Dayton to lose another business. I wouldn’t have retired yet,” Crothers said.

She has been sending letters to State Farm policy-holders announcing her retirement. She said she and the staff had some “cry fests” over those.

“You work with farmers so much, on many levels, with acreage reports, production reports, and hail and fire reports,” Crothers said, “They are in here a lot. Even if they’re not my family, they are dear to my heart.”

Crothers has been in an office downtown for the past 43 years.

She has been on the Dayton Chamber board, “more on, than off” since 1982, and plans to continue working on many Chamber events.

This year would have been the 26th year for All Wheels Weekend, but it was canceled because of the COVID-19 situation, she said.

Crothers is keeping her fingers crossed about the fate of Christmas Kickoff for this year. As the chief organizer, she has been talking with people about the event and getting a feel for the situation.

Crothers said she is the last original member of the Dayton Development Task Force, and she continues to serve on the board.

Crothers and her husband, Gene, have three children; Daron McCauley, and daughters; Kimberlea Seney, married to Byron, and Jennifer Hughes, married to Casey. They have four grandchildren, Tayven and Sadie Seney, and Keelie and Bryer Hughes.

She wants to spend more time with them, including visiting Tayven at WSU and attending more away games and visiting Keelie at her new home in Madras, Ore.

She also wants to spend more quality time with friends and traveling to some of her favorite haunts, like Maui and Las Vegas.

“If you’re going to do a little living, now is the time,” she said.