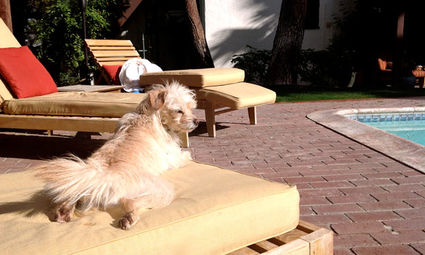 (On The Road Part Five)

Following the harrowing rescue of Mr. B from the (potential) clutches of the pterodactyl, we proceeded on down the coast uneventfully. Which believe me, was a blessing.

On a previous trip south in the pre-Cookie days, we'd randomly stopped each day in whatever town we happened to find ourselves in, looking for what seemed to be interesting or unusual places to overnight. On one memorable occasion we'd knocked on the door of a B&B that sat on a high bluff over an ocean inlet. The sound of the waves is always soothing, and as it was getting late we were hoping to find a room available.

The host told us that they were pretty booked up but there was one small room we could rent. "Which room is that?" we asked, not that it mattered. "The Seal Room" was the reply. "Sounds perfect!" we chimed. "Wow honey," I enthused, "the Seal room! Why do you suppose they've named it that? Maybe they do a seal motif in there, you know, seal lamps and pillows and stuff."

It was only later, somewhere towards the middle of the night, that the reason for the name became audibly clear. The horrendous honking of a cluster of seals woke us up, and kept us up, as they were located on a slip of beach directly below our room. This was confirmed after breakfast when we climbed down a rickety staircase and found them eyeing us suspiciously.

"There's quite a lot of them" I muttered under my breath. "I wonder what you call such a large group of seals?" (A quick search turns up a rather eclectic and surprisingly large number of options-a colony, a herd, a pod, a harem, a rookery, a crash, a spring, a team, a flock, a plump, a bunch, and a knob!). But at the moment, we had no time for such niceties. We high-tailed it up the stairs, being honked at all the way. Which leads to an important question. Why not just call it a honk of seals?

Our night in the Seal Room made for a good story, but it was not a location we'd choose to revisit with the dog. For Cookie's first road trip we'd rented a 1940s-era home in Palm Springs. Upon arriving we were particularly excited to find that although the home itself was on the funky side, it had an enclosed courtyard with a heated swimming pool and plenty of new deck furniture. Score!

This was where we'd be spending our winter days for awhile, and no one was more pleased than Cookie who, you may recall, is part chihuahua. Palm Springs is basically chihuahua heaven, and the streets are packed with chihuahuas. In the pet stores they sell little booties for the dogs to wear when the pavement is hot enough to fry an egg, and other amenities such as matching dog-and-owner Hawaiian shirts and muumuus.

Our little backyard paradise was perfect except for a few small details. The pool and furniture and landscaping, plus the house and a small casita, all bordered by a high stucco wall, meant there was very little room for ballgames. And Mr. B, free at last from the confines of Cookie's travel kit, was eager for some fresh air. Unfortunately, given the odd way he bounces, the confined space, and the general unpredictability of my throws, Mr. B all too often found himself in the swimming pool, with a highly agitated dog standing by and considering all options.

Cookie is not, as far as we know, a swimmer. There are dogs that swim, and dogs that don't. Cookie is more of a sunbather. Poolside works well, but we were not at all eager to have to dive in and rescue a freaked out, soaking wet dog. So you may imagine our heightened concern when we found out that Mr. B doesn't float.

Oh he floats for awhile. Just long enough for Cookie to learn that by pawing aggressively at the water she might be able to get Mr. B to start floating towards her and she could try to r-e-a-c-h out with an extended paw and try to grab-"Hell's bells. He just sank!" I shouted. "Mr. B is down! Stat! Stat!"

Thinking quickly, I snagged a pool noodle and dove in, with no regard for my own safety. As Cookie watched anxiously from above, I plowed my way to the bottom of the deep end, where, of course, Mr. B had lodged himself. A good eight feet below the surface, I grabbed hold of him and launched myself back up, gasping for air as I broke the water's plane. Success! Water poured out of Mr. B, who seemed otherwise unaffected by the mishap. And once again, the look of gratitude in the eyes of a small dog was more than enough reward for my heroic rescue of her wing man.