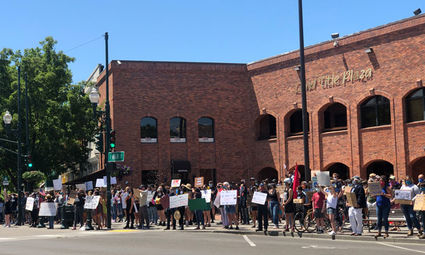 Protesters gathered on Sunday, May 31 in response to the recent death of Minneapolis, MN man, George Floyd, by a police officer who is in custody for his murder. Several hundred people gathered at Walla Walla's Land Title Plaza, with people filling sidewalks on both sides of Main Street from Colville Street beyond Spokane Street.

WALLA WALLA-The announcement for the protest was seen on a Facebook post, listing the 1 p.m. time, the Land Title Plaza as the place, with the words 'Peaceful Protest' as the title. The post also featured an image of George Floyd's face and the words "I Can't Breathe." George Floyd's death on Memorial Day in Minneapolis, under the knee of a Minneapolis police officer, sparked other protests across the country, in Europe, and beyond.

The idea for the event came to social media specialist Lindsey Luna of Walla Walla after she saw a lone young woman sitting in Land Title Plaza on Friday with...