By Emma Philbrook
the Times

Celebrate those who helped you achieve your goals 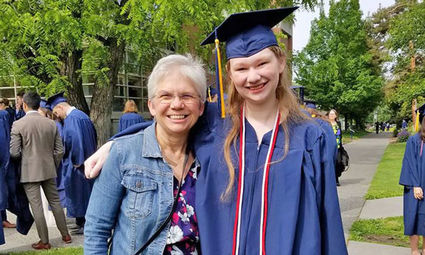 Emma Philbrook (r) with her aunt, Vicki Martin, at her 2019 graduation from Whitman College.

Slightly less than a year ago, a past version of me was asleep in my bedroom. A blue graduation gown was hanging in the shower in the hope that the wrinkles would disappear before I had to wear it in public. A matching cap, having been passed between a dozen or so relatives kind enough to feign admiration for the crocheted decorations on the top, perched atop an arm of the living-room sofa. There was cake in the fridge. Chocolate. Well, I'd tried to do chocolate, but I put too much coffee in the filling, and it ended up as mocha. We still ate it.

It's been a year. In some ways, it feels longer. We crammed both sides of my family into the front two rooms of my house, grandparents and all, the sort of scene that the folks up at the CDC have nightmares about nowadays. I don't feel like quite the same person I was a year ago. I feel like I've crammed a lot of life into a year-first apartment, first solo plane flight, two semesters of cerebellum-busting study, and enough crocheted housewares to kit out the McMansion of your choice. But at the same time, I look over at the piano and see that I haven't bothered to find a permanent home for my college diploma. When I finally stagger into my bedroom, I'll trip over the bag of rhetoric textbooks the Whitman bookstore wouldn't take back. It's been five years and five weeks all at the same time. It's weird.

It was a good graduation. The ceremony itself was okay-I didn't trip anyone, and my family was too far away from the stage to see me mangle the theoretically-simple act of getting a diploma. The reception afterwards was nice-final goodbyes to old friends, pleasant chats between family members and professors, one last glass of Whitman's too-sour lemonade. But it was the things before and after that really stick in my memory.

My dad and stepmother came up with a friend they were helping move. My brother and my cousin and I, being on hand and not having much better to do on the day before graduation, helped unpack the U-Haul. One of the dials on the stove got jostled when somebody set a box on top of the burners. The contents weren't flammable, but the box itself caught fire, filling the air with smoke and curses.

I was showing my cousin around campus when we ran into an old classmate who was waiting to be picked up by her extended family. I wanted to invite her to browse around downtown with us, but my cousin had to leave the next afternoon, and I didn't want to intrude on our family time. Then, miraculously, the invitation I was contemplating made its way out of my cousin's mouth. The three of us bought absolutely nothing and had a fabulous time.

I planned a backyard ice-cream social for after the graduation. I invited old friends and my past and present teachers. Exactly one person outside my family was able to make it, which was just as well, since it started raining. We all came inside and helped ourselves to seconds.

I know that some of you reading this know a student, or are a student, who will finish high school or college or their Ph.D. alone in their house. To these people, I say: the cap and gown are no big deal. Your awards and scholarships and grades and class rank stand as testaments to your hard work whether or not the rest of the town knows about them. There will be other chances to eat cake, drink lemonade, and cram into overheated gymnasiums, although that last one might have to wait. But for the love of all things holy, get in touch with the people in your life who got you this far. Call. Skype. Send letters. Celebrate them and let them celebrate you, because you will cherish those connections long after your diploma has disappeared into your files.