Here is my toilet paper saga, which started on March 17. I could say I was scammed, but that's not totally true. Perhaps more like mislead. 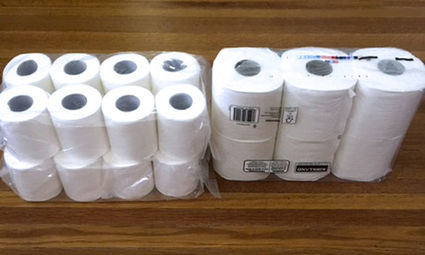 McMunn's photo illustrates her misguided purchase, the packages on the left show 16 rolls for $80, compared to six large rolls for $3.50 (right).

When toilet paper supply was becoming an issue, I thought I would Google it and see if it really was that hard to find. I had plenty on hand, and it wasn't about over stocking or hoarding. My thought was if I was able to order it easily, I could share with family and friends. I found a site called Accofe.com (which is no longer on the web) and found they had several different products, one of which was toilet paper. The picture showed a package much like we buy from Costco, and for just $25. I thought it was a bit much but was willing to buy it. Then in smaller print it says, eight rolls. H...