A conversation with Tom Tsuchyia 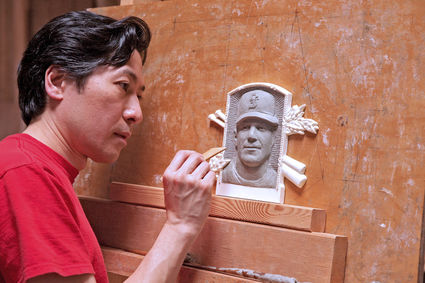 Ever wonder who designs the baseball Hall of Fame plaques? Last year when my brother Howard and I were on the press bus heading into Cooperstown, we happened to meet Tom Tsuchiya who has created all of the HOF plaques since 2016. Counting plaques he is currently working on for this year, he will have completed twenty-three in total. This means he has portrayed both Seattle Mariners who have been inducted to the Hall of Fame: Ken Griffey, Jr. and Edgar Martinez. What follows are portions of my phone conversation with Tom Tsuchyia last week.

E.U: Are you holding up okay?

TT: "As of yesterday, I've been working from home. And so have moved a lot of stuff from my studio to my home."

E.U: Have you already started working on this year's plaques?

TT: "Yeah. I have completed pretty much two of them so that was Ted Simmons and Marvin Miller those two are completed and I'm working on (Larry) Walker and starting on (Derek) Jeter next week or so."

E.U: I was doing a little research and found out Mindy Ellis was the artist before you. Did you ever meet her?

TT: "I actually met her in 2016 when I took over. I briefly met her and felt she was a nice person. She retired because she had to have surgery done on her arms. She physically could not make the plaques."

E.U: How long do you plan on doing this?

E.U: Since you do other sculpting have you had any memorable responses when clients see the plaques in your portfolio?

TT: "Oh yeah. Absolutely. A lot of them are pleasantly surprised. Oh, wow you do the plaques from Cooperstown. No way! Especially the ones that follow sports and of course baseball fans they really enjoy learning about it. One of the topics every time I talk about it is that they ask is Pete Rose going to get into the hall?"

E.U: Which plaque is your favorite so far?

TT: "That's a tough one. (Laughs) I like Trevor Hoffman's a lot. I thought it was really neat. It was one of the first ones that I made that I really, really liked a lot. I like all of them. I put so many hours into each of them. I'm very critical of what I do but I'm just trying to get better all the time. Last year for example, Edgar, I thought I captured his big blocky strong look and the expression was really good."

E.U: The individual players are given a smaller replica plaque; do you design those as well?

TT: "What happens is they take a digital scan of the original plaque and they reproduce in a smaller scale."

E.U: What other projects, other than those for the Hall of Fame, are you working on?

TT: "I officially stopped working on a sculpture of Marian Spencer who is a Cincinnati civil rights icon (due to Ohio Governor DeWine's stay at home order for COVID-19). This is a life-sized bronze sculpture, depicting her with a couple of children, representing her legacy in civil rights and her achievements in desegregating. She was a pretty amazing person. This also happens to be Cincinnati's first statue honoring a particular woman. She passed away last summer at the age of 99. The original plan was to dedicate her sculpture on June 28th which would have been her 100th birthday, but the way things are going with the coronavirus it may not happen. We will eventually get it. It is going to be located on the river front area of Smale Park."

TT: "Also, Marty Brennaman, our announcer who retired last summer. He's getting inducted into to the Red's Hall of Fame, his plaque is in the process of being created. The big projects are the Hall of Fame plaques and the Marian Spencer. This time is always my Hall of Fame time of the year. It's an exciting year. It's exciting in a personal way because these are the guys I've seen. It's really neat."

E.U: Who's the next one in line that will go in from the Reds?

TT: "Most likely it will be Joey Votto. He should be a first round pick. Of his generation he is one of the best hitters. (Dave) Concepcion may still have a chance, who knows."

After our initial phone call ended, Tom called back a few minutes later to share a quick story he had regarding a player's reaction to seeing his plaque. Trevor Hoffman was a closer for the San Diego Padres and was inducted in 2018. Hoffman hugged Tom and thanked him after seeing his Hall of Fame plaque. To view some of Tom's work check out http://www.TomTsuchiya.com.

I reached out to Paul Storino who is a senior project manager at Matthews Architectural Products, the Pittsburg, PA foundry that produces the plaques, to find out about the history of the artists before Mindy Ellis and Tom Tsuchiya. Matthews Architectural Products took over the production of the bronze plaques in 1983. According to Storino, in-house employees did the sculpting before Mindy Ellis. Mindy's seventy-six plaques dating from 1995 to 2015 are the most by an individual artist at this point.

Tom Tsuchiya was named as the sculptor to replace Ellis after she retired five years ago and with changes made to the induction rules at the HOF, he may surpass Ellis' record very quickly. The Veterans Committee and the Baseball Writers Association have been voting in members at a higher rate in recent years as Tom Tsuchiya mentioned. A rule change in 2015 reduced the number of years a player can be on the HOF ballot from fifteen years to ten years. This has created a crunch for some players and caused the Baseball Writers to list more players on their ballots. They've always been able to vote for up to ten players per year, but they rarely did. Since the rule change, up to half of the ballots now have ten names listed. Should this keep up, Tom could catch up to Mindy Ellis... within a decade.