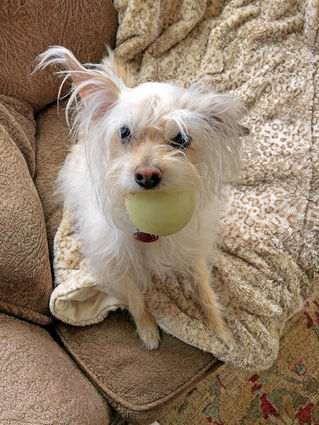 I've concluded that there are really just two types of dogs - those who like playing with balls, and those who do not. From the first day we spent together, me tossing and Cookie chasing a ball across an empty infield in a deserted park, it was clear that she was a ball dog.

Up until then my only ball dog experience was with a big-boned mutt that lived a couple doors up from our home on Palm Avenue in West Seattle. The short and narrow street sloped downhill from there, ending in a small park above a steep bluff. The mutt's owner-his name was Max, which I believe was also his dog's name-would stand in the street and throw the ball as hard as he could, trying to bounce it all the way to park. The dog would go ballistic, shooting down the road at rocket speed, and then return just as quickly and drop the soggy, drool-soaked ball in front of the nearest human, ready for the next throw.

This game had no end. As long as someone would throw the ball, Max was on it. I'm reasonably certain that it was the owner of such a dog who, in desperation, invented the automatic ball throwing device. You've seen them on YouTube I'm sure. You simply teach your dog to drop the ball into the hopper, and you are forever dispensable, at least as far as ball games are concerned. No help for me though.

For Cookie, such a device would be worthless. Being mostly terrier, she's not going to retrieve anything, much less her favorite ball. She's much more inclined to back the ball into a corner and zealously guard it. In fact, the first instruction we have to give visitors is "don't under any circumstances try to take her ball!" When tossing the ball around the yard Cookie's idea is that you are supposed to try to retrieve it, by chasing her around and around the yard while she barks at you (barking while running with a large ball in her mouth has proven to be one of Cookie's many talents).

Over the 8+ years we've enjoyed each others' company I've learned a lot about how this particular dog/ball relationship is structured, and it's rather complex. Hundreds of hours of ball games and dozens of balls have been dedicated to this research, each and every one a potential adventure.

Cookie's first few red rubber balls, sold under the name 'Bad Cuz', actually had horns and stubby little feet. Consequently, they didn't behave as a ball should because the horns and feet produced unpredictable bounces.

Fortunately, dog toy technology provided a partial solution. Enter the Chuck-it, a curved plastic ball thrower that turned my 35-mile-an-hour fastball into a Randy Johnson missile. This enabled me to launch the ball over the roof of our house, sidestepping the lack of predictable bounces, at least briefly. The ball would disappear while Cookie anxiously cocked an ear waiting to hear it land. The landing would be completely out of sight, sometimes in the yard, sometimes in the street, sometimes on a roof, and sometimes in a tree. Each a separate challenge to be discussed at some length in a future chronicle.

Just as we were both getting comfortable with the Bad Cuz, it was taken off the market by the manufacturer. Its replacement, the Good Cuz, had no horns but even bigger feet. Cookie hated it. The mind of dog is a wonderful and often mysterious place, but it was clear that a satisfactory replacement ball was urgently required, before our last remaining Bad Cuz ended up in a tree with its siblings. So back to the pet store, where an incredible number of ball options can be found. As is often the case with Cookie, the usual suspects failed miserably. Tennis balls in particular were spit out like yesterday's kibble.

After much experimentation, we settled on a pale green rubber ball that came pre-drilled with two round holes, placed like polar caps. It bounced well and was a more accommodating size for Cookie, who spends a large part of every day with the ball securely clamped in her jaws. By now it was clear that this was not just a ball, but yet another addition to the family. We named it Mr. B. In myriad ways Mr. B has come to dominate our lives as rigorously as its owner, as you'll see in the next chapter of the Cookie Chronicles.