The Mat Birds wrestling season is here, with inclusive changes and big goals. 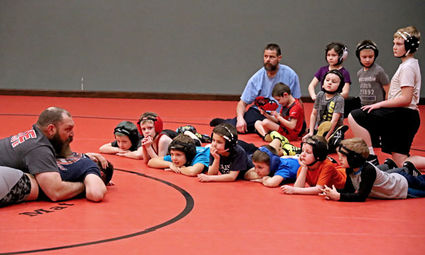 Jake Winona walks a group of young wrestlers through a wrestling move, step by step. The group of wrestlers are getting ready for their home tournament on March 14.

Waitsburg-The Waitsburg Mat Birds Wrestling Team is back on the mat for another season, and all the athletes are working to secure a spot at the Jason Crawford Memorial Tournament. The Little Guy's wrestling team has a full schedule ahead, including hosting a tournament in Waitsburg again.

The wrestling team has a full roster this year, with 37 athletes from Prescott, Dayton, Waitsburg and College Place turning out. The team practices on Tuesday, Wednesday and Thursday evenings at Preston Hall Middle School in Waitsburg. Carlos Norris, a senior at Dayton High School and a Mat Bird alum, has begun hosting an advanced wrestling practice on Monday nights for the older wrestlers. Carlos is currently the only DW Combine wrestler and brings a fresh coaching technique to an already-strong program. The team will travel to tournaments weekends starting in March.

The wrestling season wraps up in April, at the Jason Crawford Memorial Tournament in Spokane, Wash. The tournament serves as the Washington Little Guy's Wrestling Association's State tournament and is held at the Spokane Arena. Last year, 3,500 kids aged 6-14 years old wrestled at the event.

Kristy Taylor, who oversees all Mat Bird's operations, said the team was able to purchase singlets (the one-piece suits that wrestlers wear), protective headgear, and shoes, as well as matching warm up outfits, for athletes to use on a checkout system. Taylor has been working to reduce the costs for wrestlers and their parents and having the gear available is one way for parents to save some money.

An exciting new change for the Mat Birds is the addition of a girl's only tournament in partnership with their regular tournament. Many parents are uncomfortable with girls wrestling co-ed after a certain age, because of the close contact of the sport. Taylor said that the Washington Little Guy's Wrestling organization, as a whole, has seen an increase in female wrestlers with girl's-only being offered. The Mat Birds will host a girl's tournament at the March 14 tournament, with girl-only mats set up in the Waitsburg Elementary multipurpose room.

The team is looking for volunteers to help the day of the tournament. The wrestling team is currently seeking experienced referees and people to help in the bracketing and pairing rooms.