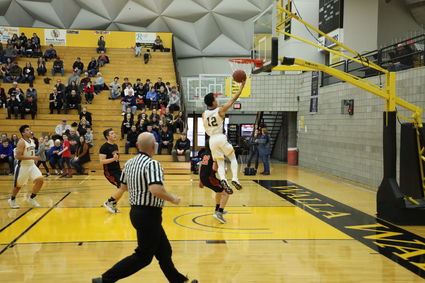 Senior Jonathan Cardenas with the steal and layup for Prescott

WALLA WALLA-The Prescott Tigers traveled to Walla Walla Community College to play the Pomeroy Pirates Friday February 21st at the Dome. Since both teams were coming off of first round playoff losses this was a loser out game. The winner would have an opportunity to play on Saturday for the chance to advance to state. #1 Omar Velazco opened the game scoring Prescott's first four points on a combination of free throws and an offensive rebound that he converted into a layup to give Prescott the early 4-0 lead. The first quarter ended with Prescott ahead 17-12.

In the second quarter Omar Velazco started things off for the Tigers with a three-pointer. It was after this point in the game that Pomeroy went on a run. They out scored Prescott 14-3 to take the lead at halftime 26-23. #12 Jonathan Cardenas was in foul trouble and played limited minutes in the second quarter and the team's defense wasn't as tight without him on the floor.

Prescott opened the third quarter with a 7-0 run. Baskets by #3 Victor Garcia and #23 Miguel Ayala allowed the Tigers to retake the lead 30-26. Later in the quarter, a great pass from #11 Antonio Hernandez found Miguel Ayala which lifted the lead to ten at 40-30. The quarter ended with Prescott up 40-32.

Pomeroy managed to tighten up the game one more time, scoring the first five points in the fourth quarter making the score 40-37. Victor Garcia had a big fourth quarter for the Tigers-he scored ten of his game-high twenty three points in the fourth. In the closing moments of the game, Omar Velazco was leading the breakaway for the Tigers and flipped a behind the back pass to Victor Garcia who scored on the layup. Prescott won the game 53-41.

Pomeroy sophomore Trent Gwinn was assigned to guard Jonathan Cardenas. His coach must have told him to never leave Cardenas' side. He followed his coach's instructions so closely that in the fourth quarter a few times on offense Cardenas stood a half court without the ball and Gwinn stayed right on him. This essentially took both players out of the game and made it a four on four game. Miguel Ayala had a big game defensively for Prescott. He pulled down ten of the teams twenty-five rebounds. After the game both Jonathan Cardenas and Victor Garcia were named as All League selections for the 2020 SE 1B Boys Basketball conference.