Walla Walla loses in second round to Central Valley, 84-77 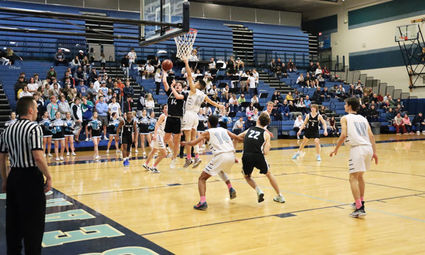 Diego Jaques drives to the basket and shoots

SPOKANE-The Walla Walla boys varsity basketball team played in the semi-finals of the district playoffs against the Central Valley Bears Saturday, February 15th on the Bears' home court. Early in the first quarter the Blue Devils #12 Dillon Wasser blocked 6'5" power forward Quinn Johnson and then #24 Jacob Coram hit a three-pointer for the Blue Devils first lead of the game at 9-7. Walla Walla finished the first quarter up 16-11.

A beautiful pass from #2 Dylan Ashbeck to #10 Michael Cornia opened the second. Later in the quarter Michael Cornia made a great move for the reverse layup that pu...