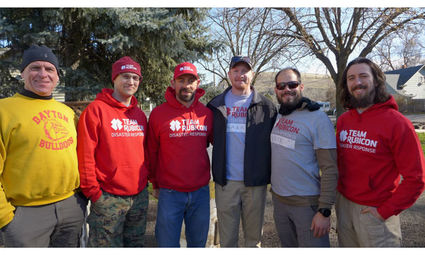 Team Rubicon (TR), a veteran-led disaster response organization, is on the ground in Waitsburg. Team Rubicon focuses on serving vulnerable and at-risk populations affected by disaster. Formed in 2010 by Marine Corps veterans Jake Wood and William McNulty in response to the 2010 earthquake in Haiti, the name comes from the phrase "crossing the Rubicon" from a Julius Caesar battle, and refers to any group committing itself to a risky course of action.

On Thursday, Feb. 13, two TR volunteers were already at work in Waitsburg, visiting homes they had been referred to through the Waitsburg Christian Church. Chris Ofsthum of Poulsbo, Wash., saves up vacation leave from his job as a logistics expert in the Navy, and has been volunteering with TR since the Oso, Wash. mud slide in 2014, which took 43 lives and destroyed 49 homes and other structures.

His partner in the field that day, Nita "Bug" Hock, of Port Orchard, Wash., became involved with the organization following a rare tornado that hit Port Orchard, WA in 2018, damaging approximately 250 homes. Their first contact with Waitsburg residents involved going door to door, assessing damage and setting up the response logistics.

Ofsthum noted that the information they collect goes directly into the National Incident Management System (NIMS,) which ties to the Incident Command System (ICS), the management system used by FEMA, the Federal Emergency Management Agency, as well as County emergency management systems.

Team Rubicon will continue to work in conjunction with state and local authorities. Volunteers will conduct site surveys, debris management and muck out the homes in the communities affected by the flooding. Team Rubicon will also assist with spontaneous volunteer management. Those in the community needing assistance please contact: (844) 965-1386.

'Spontaneous volunteer' is a term that refers to the hard-working citizens who have been in action since early Friday morning on Feb. 7. The response has been led by the Waitsburg Christian Church, with Pastor Matt Wyatt and others mobilizing supplies, volunteers, equipment and more. (see related article.)

The TR response has been dubbed 'Operation Let 'er Muck' and on Saturday, Feb. 15 the response type was moved from a Type 4 incident response to a Type 3.

Disaster Typing is a way of defining the size of scope of a disaster and the response resources needed to manage the event. Type 5 is the smallest, and Type 1 is the largest.

As applied to Team Rubicon, we typically allocate responses from our organizational structure as follows:

Type 5: Within the State that the incident occurred, and typically only a week or less.

Type 4: Within the Territory that the incident occurred, typically up to 14 days

Type 3: Across the US / International Teams as needed, over 14 days as needed/until resources are exhausted

Designating this response as a Type 3 allows TR to cast a wider net for volunteers and pull from a greater number of supply caches. Those numbers flex upward or downward as the need for assistance fluctuates. The additional volunteers and supplies are to support the entire Operational coverage area, not any single community. This expansion allows for a maximum of up to 60 volunteers per day, up to March 10th.

What this means for Waitsburg is that TR's Incident Commander established a forward operating base in Waitsburg on Sunday, Feb. 16, which will be staffed with up to 10 TR volunteers. The number working out of that base will fluctuate each day as weather conditions, TR volunteers' availability, and work orders allow. The TR volunteers are being hosted by the Waitsburg Christian Church who are coordinating meals and other resources for the team, so readers should contact them directly if they would like to contribute tangible resources.

Monetary donations can be given at the link below and can be specified to support Operation Let 'er Muck by commenting in the comment box on the payment confirmation page.

TR volunteers on the ground as of press time are still in assessment mode; contacting property owners, assessing damage and turning reports into work orders. The bulk of the TR volunteers should be arriving Tuesday, Feb. 18, night with plans to house them at the Lions Club building, with showers on offer from the School District, and the Waitsburg Christian Church serving as the command center.