By Beka Compton and Tracy Thompson
The Times 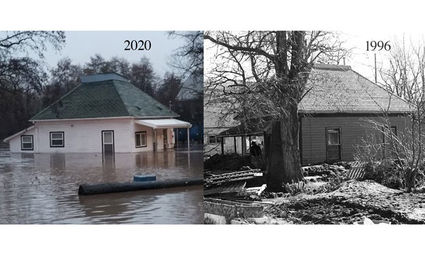 This Waitsburg home on Preston Avenue was built in 1908 and has survived past floods, including the 1996 flood. The owners plan to pull it apart, dry it out, replace the floors and repair it to be someone's home once again.

WAITSBURG-February 7 is starting to earn quite the reputation in the Walla Walla Valley, as two major floods have ripped through the area in less than 25 years. The 2020 flood, which people are just now able to start assessing the damage from, fell on the 24th anniversary of the 1996 flood.

The flood is suspected to have been caused by a combination of snow, heavy rain, and unusually warm temperatures causing high water levels in local rivers. On Tuesday, Feb. 5. The National Weather Service reported 3.8" of snowfall, with .69" of rainfall on Wednesday, Feb. 5, a record amount, and .91" of...