Waitsburg nursery to move and expand 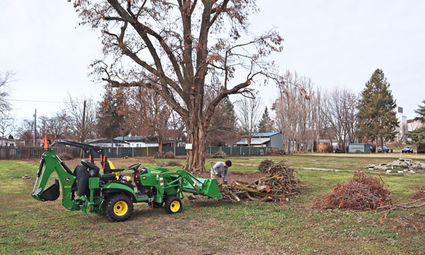 Big things are in store for Nancy's Dream Garden Center. Over the next year, the business plans to move to a larger lot on 2nd Street, which Doug Biolo has been working to clear out. The new lot will provide space for more greenhouses, landscaping equipment, and lawn care supplies. Biolo said they are hoping to add a cyclist stop eventually.

WAITSBURG-Doug Biolo didn't have plans to stay in Waitsburg after his mother, Nancy Aronson, passed. It took a little bit of convincing from his sister, Janet Lawrence and a split-second decision to quit his job in Portland, Oregon. Biolo and Lawrence decided that it was time to give life to their mother's dream: a garden store. Now, they are getting ready to move Nancy's Dream Garden Center so that they can offer more than plants.

Nancy's Dream Garden Center, currently located at 503 W 2nd Street in Waitsburg, opened last year over Mother's Day weekend. The business plan was one that Lawrence and her mother had worked on for many years.

"Not everything bad comes from someone passing away," Lawrence said. "It's brought my family closer. It's brought me and my brother closer."

Gardening was something that was near and dear to their mother, and since they already had a business plan drafted up, they applied for a business license the same night that Biolo said 'let's do this.'

Their first year as a garden center went better than they anticipated. Working with growers from around the state, Nancy's Dream sold everything from succulents to Christmas trees. With such success, they knew that they had to invest in more space, so the business purchased a large lot on the corner of 2nd and Warren streets in Waitsburg, roughly two blocks closer to town than their current store front.

"We want to make something a little more permanent. We'll be able to offer a little more, and that will be good," Biolo said.

The business plans to be moved and operating at the new location by 2021. The intent is to be more than just a garden center as Biolo and Lawrence want their shop to be a destination.

The new lot will be complete with two greenhouses, a pond, surrounded by decorative, natural fencing. One of the greenhouses will be offered to a local grower for starting seeds and raising plants.

Biolo said he plans on creating a barrier out of shrubs and plants that are able to thrive in the area, complete with wine barrel planters full of flowers that the shop will sell and benches for people to sit on and relax. Over the next five years, Biolo and Lawrence plan to add four tiny houses for short-term rentals and an area for cyclists to stop and rest, recharge, and clean up.

Nancy's Dream Garden Center offered locally-grown watermelons, Walla Walla Sweet onions, and various fruits from Warren Orchards last summer, and they offered Christmas trees during the holiday season. They also participated in the Schulke pumpkin fundraiser last autumn which honors the memory of a child lost to cancer with all funds going to the Ronald McDonald House. They plan on continuing these ventures in the future and have added more chilled storage to keep up with the demand for fresh fruits and vegetables.

"We are ready to expand, we definitely are," said Lawrence, excitedly. "We were really pleased with the support and the feedback from the community. It's been great. We'll still be on the main drag, which will be great for people who are coming from out of town, as well."