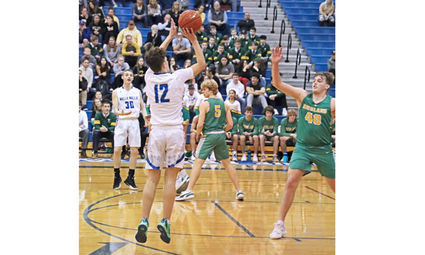 #12 Dillon Wasser sinks one of his seven three-pointers of the night.

WALLA WALLA-The Walla Walla boys varsity basketball team played their rivals the Richland Bombers in a conference game Friday January 24th. In the first quarter #12 Dillon Wasser got things started for the Walla Walla Blue Devils hitting a three-pointer. #10 Michael Cornia made his presence felt early with a blocked shot. Four of the five starters scored in the 1st quarter to give the Blue Devils the lead 16-10 at the end of the 1st quarter.

Walla Walla started the 3rd quarter missing their first four shots in a row before #2 Dylan Ashbeck got them on the board to make the score 31-36 Bombers. The Blue Devils offense picked up from this point. Dillon Wasser's fifth three-pointer of the game tied the score at 39-39 and you could feel the momentum shift in Walla Walla's favor. The very next possession Michael Cornia beat his defender to the rim to retake the lead at 41-39. At the end of the third quarter Walla Walla held the lead at 48-47.

The Blue Devils showed in the 4th quarter how quickly they can put away a team. With the score 51-51 they went on a fifteen-point run. First, they hit three-pointers on three consecutive possessions by #30 Brandon Smith, Dillon Wasser (his seventh of the game,) and #24 Jacob Coram. Then they scored the next six straight points punctuated by a break-away dunk for Michael Cornia. With the score now 66-51, Richland would manage one last three-pointer before time ran away giving Walla Walla the win 66-54.

Coach Adam Berg had this to say about his team's effort. "Pretty good. Yeah we knew we had a battle for 32 minutes that's the way they play, how hard they play. Got a little rattled there in the first half and really good in the second half. We kind of came together. The effort was great."