D-W girls come from behind to nab second league victory 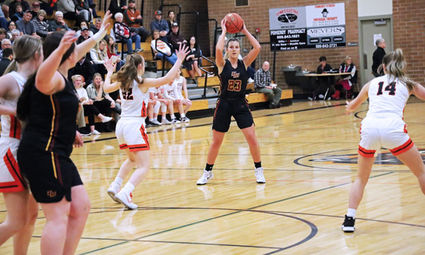 Early into the contest the Patriots rushed out to a 7-2 lead and one of the D-W's top two scorers, freshman forward Claudia Benavides, fell hard to floor two and half minutes into the game with an apparent twisted ankle.

Without their offensive threat and defensive presence in the middle, Liberty Christian made it 19-10 midway through the second quarter. However, a healthy Benavides returned just before Head Coach Tamira Culley called a full time out, and that was the beginning of things turning around. Benavides hit a bank shot and Seney nailed a three-pointer to cut the deficit to five.

One more lead change by the Patriots at 38-37 with three minutes left in the third was spoiled by a 7-0 run that gave D-W the lead for good. With 34 seconds left in the third quarter, a steal and layup by senior Destiny Brincken gave the impression that from then on it was Dayton-Waitsburg's game to lose.

"I'm proud of the girls that came off the bench for the girls that were in foul trouble" Culley said. "Coming back from being down double digits is a first for them. They took better care of the ball and got it done."

The Patriots pulled to within one point at 55-54 with three minutes left on a penetrating layup by Hannah Bush, who finished with 16 points. But D-W's defense would force seven turnovers and only allow two more points while scoring 18 of their own.

"I was proud of our team for coming back in the second half," junior Mackena Culley, who finished with six points on two key three-pointers, said. "We all wanted that win and once we picked up the intensity, I knew we were going to win."

"The win wasn't yet in our grasp in the last minutes of the game," Coach Cully said. "They upped the defense and intensity, got the turnovers and kept passing it inside. The girls should be very proud of their play."

The final four points were scored with two Benavides bank shots showing she had returned to her scoring ways ultimately finishing with 18 points. Sophomore Megan Forney also had a strong scoring game as she finished with 10 points. Five more D-W players scored points to make it a true team effort.

Dayton-Waitsburg's girls basketball team ran into an immovable object in the form of 14-0 Pomeroy in a tough road loss 68-25 Tuesday night.

"Pomeroy has a great program with several strong players," Assistant Coach Desirae Jones said. "Every player that suited up for Pomeroy scored."