Walla Walla girls come back to win over Pasco, 61-50 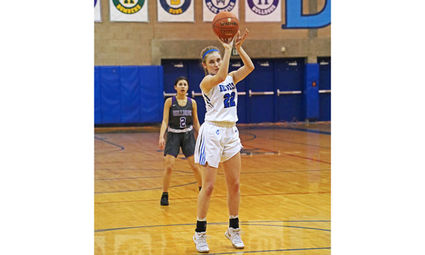 Emmalyn Ogden sinks a free throw in the 4th quarter for Wa-Hi.

WALLA WALLA-The Walla Walla girls basketball team hosted the Pasco Bulldogs Tuesday January 14th in a conference game. They lost their previous matchup this season in Pasco on December 14th. Tuesday's game didn't begin well for Wa-Hi as they quickly went down 8-0. #34 Mia Huxoll scored the first points for Wa-Hi with a three-point play. Unfortunately, those would be Wa-Hi's only points in the first quarter. Pasco would answer with three of their own points ending the quarter at 11-3.

The second quarter didn't start well for Wa-Hi despite the team's fast break production. Two fast breaks in a row ended with errant passes that resulted in turnovers. Wa-Hi's problems hitting jump shots also continued into the first part of the second quarter. At one point, a three-pointer by Pasco's #24 Ashtyn Nelson stretched the lead to 18-6 causing Wa-Hi to call a timeout. After the timeout, Wa-Hi started playing like a completely different team. #23 Rian Clear completed a three-point play. Moments later, she hit a running jump shot. Then she made a nice pass to #34 Mia Huxoll, who was fouled and completed a three-point play of her own. With a little over a minute left in the half, #20 Lauryn Lyons stole the ball from Pasco and went the length of the floor to score tying the game at 21-21. Pasco added two points before half to make the score 23-21 Pasco at the half.

After a free throw by Rian Clear, #21 Kysa Jausoro scored on a drive to the basket giving Wa-Hi its first lead of the game at 24-23 in the 3rd quarter. The passing and shooting issues of the first quarter were completely fixed by the third quarter. #25 Monica Miller took over hitting back to back three-pointers and suddenly Wa-Hi was up 38-27, and very much in control of the game. They would end the third quarter ahead 42-32, after outscoring Pasco 21-9 in the quarter.

In the 4th quarter, Wa-Hi pulled away with great passing and accurate free-throw shooting to close out the game. They would go on to win 61-50. I asked head coach Morgan Jo Poynor what the difference was between this game and the game in Pasco. "The main thing is that it's not our second game of the season. We kind of been talking about how to overcome some obstacles as a team and they've really been bought in. It was a really good team effort tonight." What changed between the first quarter and the second quarter? "Really just the intensity. We have the tendency to get a little flat on our feet and kind of wait for things to happen. It's one of those things where we talked about you need to go make it happen. They really took that to heart at that break. They came out and did really well."