By The Times
The Times 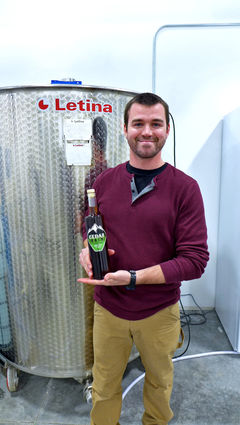 Robert “RC” McNicol has been working on the dream of opening his own liqueur business for four years now. He served as Active Duty in the U.S. Air Force and worked construction alongside his father, Robert, to raise the funds for Cedar Rain Spirits.

A native of Portland, OR, McNicol moved to Walla Walla as a sophomore and graduated with Walla Walla High School’s class of 2011. McNicol joins Rusty Figgins of XO Alambic and Mike Collins of Bard & Bee Meadery in the Blue Mountain Station complex, creating a spirit wave at the location just outside of Dayton, WA.

Cedar Rain Spirits is currently focusing on three flavored liqueurs, including Cold Brew Coffee, Traditional Coffee, and Green Tea. McNicol said the vodka base is what sets his products apart from the others. It is derived from grain neutral spirits (GNS), which he filters down from 190-proof to 80-proof.

McNicol makes every effort to source his ingredients and services locally. The coffee beans come from Walla Walla Roastery, with the Cold Brew Coffee offering the most subtle, smooth taste, while the Traditional Coffee has a stronger kick. The Green Tea is a mix of Earl Grey and Green Tea, and it has a sweet, bright flavor with hints of peach and ginger. All of the products taste great on the rocks.

The eye-catching logo was designed by Dayton graphic artist Boe Stevenson of Boe Designs, and McNicol's wife, Ashlee, does all the marketing. Rusty Figgins was also instrumental in the business, helping McNicol to find the space at Blue Mountain Station and consulting him on creating the neutral spirits and running the distillery. McNicol praised him, saying, "Rusty's help has been amazing! We really try to use our community because the community we have is great."

You can now order the flavored liqueurs online at cedarrainspirits.com. In February, Cedar Rain Spirits hopes to be open to the public for tastings.