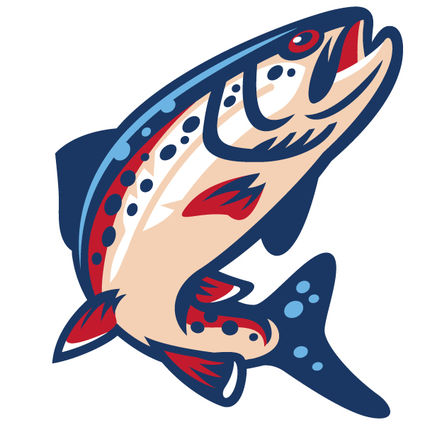 The redband trout is native to Spokane and historically comprised a significant part of the Spokane tribe's diet. Though not threatened, the redband population concerns conservationists because it has struggled to return to historic levels due to invasive predatory species and the impact of the Grand Coulee Dam. In 2017, The Spokane Indians Minor League Baseball team designed this rally mascot for alternate uniforms.

WASHINGTON, D.C.-On Monday, Dec. 16, the U.S. House of Representatives passed bipartisan legislation introduced by U.S. Senator Maria Cantwell (D-WA), a senior member of the Senate Committee on Indian Affairs, and U.S. Representative Cathy McMorris Rodgers (R, WA-05) to provide the Spokane Tribe of Indians equitable and just compensation for the lands taken by the United States as part of the Grand Coulee Dam development project in the 1930s and 1940s. Having previously passed through the Senate, the bill now heads to the president's desk to be signed into law.

"The Spokane Tribe of Indians has waited for almost 80 years to receive just and equitable compensation for the land, life, and culture they lost when the Grand Coulee Dam was constructed. This corrects a flawed adjudication process that left the Spokane out," Cantwell said. "Today, the Department of Interior, Republicans, and Democrats stand together to right this historic wrong, which will allow the Tribe to invest in regional economic development opportunities."

"The construction of the Grand Coulee Dam positively transformed our region in countless ways, but it also fundamentally changed the Spokane Tribe's way of life," said McMorris Rodgers. "This is long overdue, and I'm happy we are finally moving forward to get the Spokane Tribe the compensation they deserve and right this historical wrong."

As the largest hydroelectric facility in the United States, Grand Coulee Dam has produced electricity for towns and cities across the western United States for more than 75 years. However, since the construction of the multipurpose project, the Spokane Tribe has yet to be compensated for the significant damages to its Tribal lands and livelihoods.