YAKIMA-Prescott boys basketball travelled to Yakima to play Riverside Chrisitian on Saturday, December 14th in a non-conference game. This was a game of scoring streaks for both teams. #12 Jonathan Cardenas opened the game with a three pointer. #11 Antonio Hernandez split the defense and scored up the middle. #1 Omar Velazco drove the lane and scored on a layup to make it 7-3. Moments later in what looked like an instant replay, Omar added another to make it 9-3. Riverside then went on a 9-0 run to take the lead 12-9 at the end of the 1st quarter.

#23 Miguel Ayala scored Prescott's first two points on free throws to make it 17-11 Riverside Christian. Open shots allowed by Prescott's defense were once again the culprit, and RC took the lead by double digits. Later, #5 Mauricio Osorio put in a nice reverse layup to end the half 35-23 RC. 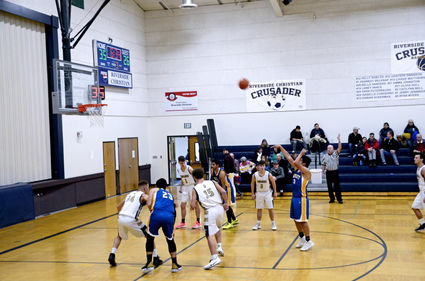 No one is sure what Prescott coach Allyn Griffin said to the boys at halftime, but the team that came out after halftime looked nothing like the team that played in the 2nd quarter. The intensity of the defense and a very actively moving team on offense kept chipping away at the lead and managed to tie the game with about a minute left in the 3rd quarter. Had more time been left in the quarter, Prescott would likely have taken the lead.

In the 4th quarter RC would take the lead again only to see Prescott tie the game at 53-53. Unfortunately, those would be the last points they would score as RC would prevail 58-53.