Josilyn Fullerton will serve as the Round-Up Queen, with Kaleigh White serving as a princess for to 2020 rodeo season. 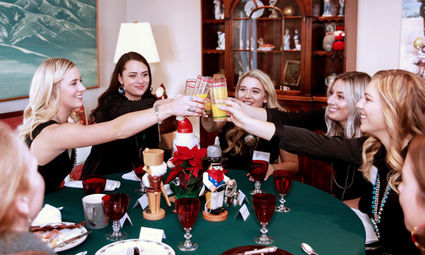 DAYTON-Let'er Buck! The Pendleton Round-Up is a world-famous rodeo with a deep western history, and each year, a group of young ladies go through an application process to be the faces of the event. Five ladies make up the Round-Up Queen and Court, and this year, two ladies from Dayton are amongst the selected five. Josilyn Fullerton and Kaleigh White both have histories of their own with one of the oldest rodeos in the country.

Kaleigh White's family has been involved with the Pendleton Round-Up since the first show in 1910. Her family has served as various board members and directors, and the first princess in her family dates back to 1970. Kaleigh herself was only 6 months old when she attended her first Round-Up, and she hasn't missed a show since. Kaleigh will serve as a Princess on the 2020 Pendleton Round-Up Court.

Kaleigh is no stranger to horses or crowns. The first time she sat on a horse was shortly after she could sit up by herself, and it just came naturally to her. She held her first crown in 2013, when she served as the Little Miss Rodeo Washington. In 2016, she held the Washington Junior Rodeo Queen title.

"I have grown so much as a person during my title years," said Kaleigh. "Rodeo queening teaches so many valuable skills, like public speaking, that many people my age don't get the opportunity to learn." Kaleigh says she can talk to anyone, anywhere, and that she owes a lot of her skills to her rodeo queening years.

Kaleigh is looking forward to spending time and making valuable memories with the other ladies on the Royal Court. She said that she is beyond excited to represent the Pendleton Round-Up in its 110th year, and that she is so thankful for the support she has received throughout the years from her community.

"You achieve so much more when you have a supportive community, and Dayton and Waitsburg have both been so supportive of my adventures," Kaleigh said. "I feel so lucky to have that."

Josilyn grew up on a cattle farm, and is not afraid of a hard day's work. She started riding with Kelli Currin and her daughter, Shayla, when she was young and got going in the world of barrel racing. She says she credits her rodeo start to the Currin family.

Josilyn has attended the Pendleton Round-Up her entire life, with the exception of one year. She said that her inspiration for trying out for the Royal Court started the first time she watched the Queen and Princesses make their grand entry. The Round-Up has a unique arena; instead of being the typical dirt footing, the arena is a grass field within an oval dirt track. The Pendleton Round-Up Court enters the arena with a bang, jumping a fence and exiting the arena after a full-speed lap around the track. The Queen is the last one in, and leads the court out, so a fast horse is necessary.

During her princess year in 2018, Josilyn fell in love with all things Round-Up. One of her favorite things is the Pendleton Round-Up's involvement in the Farmers Ending Hunger Program.

"The Pendleton Round-Up has adopted roughly 20 acres in the area in an effort to help end hunger," Josilyn said. Farmers Ending Hunger was founded in 2004, and now has more than 20 farms throughout Oregon and Southwestern Washington that donate a portion of their crop to help provide high quality food to families in need. "It's a very special thing to be a part of."

Josilyn said that this year, she has made it a personal goal to be an active ambassador to the sport of rodeo, and to help educate the public, focusing on welfare regulations and the treatment of the animal athletes.

"There are so many misunderstandings about the sport of rodeo. I want to make it a point to help educate as many people as I can this year," Josilyn stated. One of the many responsibilities that rodeo queens have is to help clear up the misconceptions about rodeo, and they have to do so in a poised and professional matter, which can be tough when you're passionate about something.

Josilyn is very excited to represent one of the most amazing events in professional rodeo. An event that is so amazing, in fact, that it was just awarded the Professional Rodeo Cowboys Association Large Outdoor Rodeo of the Year, for the fifth year in a row. It's a pretty big deal! Josilyn is looking forward to travelling alongside and making memories with her royal court, and using her past experience to help the other ladies on the court.

"Kaleigh and I used to joke that we would serve on the Round Up Court together, and we think it's pretty cool that, here we are, on the court together," Josilyn said, laughing happily. She's right: It is amazing that two remarkable young women from our communities are representing such an event. We wish them the best of luck during their travels, and can't wait to see them jump the rails at the 110th Pendleton Round-Up, always the second full week of September. 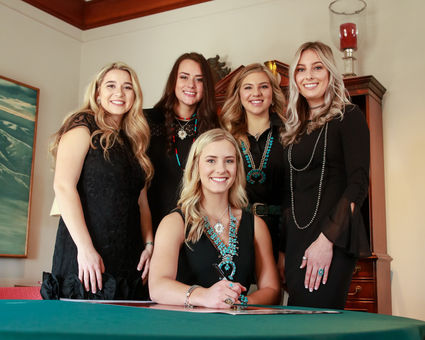