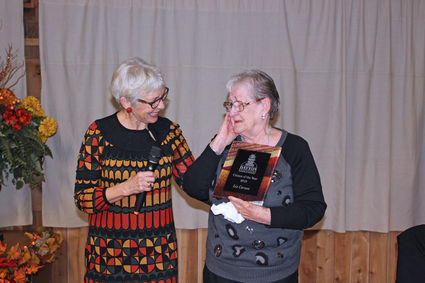 Liz Carson teared up when she was called to the podium to receive the Community Choice Award for 2019 Citizen of the Year, at last week's Dayton Chamber Awards Banquet. Carson was selected by the community for her many years of researching and documenting Columbia County history.

DAYTON-The Dayton Chamber's Community Choice Award for 2019 Citizen of the Year was presented to Liz Carson, for the decades she has spent researching and documenting Columbia County history.

Ginny Butler presented the award to Carson at last week's Chamber Awards Banquet saying, "I'm really excited to be able to give this award to this person, who has dedicated decades of her life to researching and documenting Columbia County History."

"She is truly a wealth of knowledge and an excellent resource," Butler said.

Tayven Seney was presented the award for the 2019 Youth Citizen of the Year by his grandmother Bette Lou Crothers, who extolled his many virtues.

"When this leader speaks others listen because this youth sets an example for other students," she said.

Crothers said Seney has shown himself to be a student leader on the sports field. He has been in the National Honor Society, since his sophomore year at Dayton High School, and he is its current President. He is also the FFA President and the ASB Treasurer and he finds time to volunteer for the Dayton Kiwanis, the Dayton Lions Club, and other organizations, she said.

Candy Jones presented Rick Sabin with the 2019 Business of the Year, for Sabin's Auto on W. Main St.

"The owner is seen as a thoughtful, and honest and exceptional business owner who does right by his customers," Jones said. "He is a hard worker who strives for perfection which shows in his finished products. The Dayton Community is blessed to have this business owner on our Main Street for forty years, supporting his family and several employees and their families."

Jeanie Lyonnais presented Mauricio Ramos with the 2019 Employee of the Year for his work at City Lumber & Coal Yard, and his own business, Quality Roofing Services.

"He is a friendly face, who has been a staple in the community for decades," Lyonnais said. "He is a family man, having raised successful children and grandchildren. He often volunteers his time and services, and is a valuable asset to his community."

The Dayton Historic Preservation Commission Chair Mike Smith presented a Residential Award to Jonathon Fletcher for the "high level of care" he has provided to his home, the historic 1885 Nilsson House, on E. Patit St. He also presented the 2019 Commercial Award to Mark and Vonda Anderson for their renovation of the 1908 Columbia Chronicle Building, on E. Main St.

Kathy Berg was recognized by Bette Lou Crothers for her many years of service to the Dayton Chamber of Commerce. Berg has recently retired from the Dayton City Council and moved to Walla Walla.

"We all miss you bad," said Crothers.

"We try to give people the chance to vote in many different ways. They can do it online, they can submit it through the mail, or phone it in," she said.

At the end of the nomination process a selection committee looks at them, but they individually and anonymously vote for their choice. The tallying is done at the Chamber Office, Tate said.