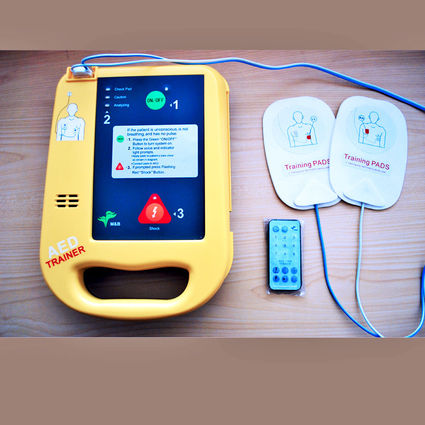 AEDs, or automated external defibrillators, are used to help those experiencing sudden cardiac arrest. It's a sophisticated, yet easy-to-use, medical device that can analyze the heart's rhythm and, if necessary, deliver an electrical shock, or defibrillation, to help the heart re-establish an effective rhythm. https://www.redcross.org/take-a-class/aed/using-an-aed/what-is-aed

According to the American Red Cross: "for each minute defibrillation is delayed, the odds of survival are reduced by approximately 10%, having access to an AED and knowing how to use one, is critical."

Naloxone, or Narcan, is a medication called an "opioid antagonist" used to counter the effects of opioid overdose, for example morphine and heroin overdose. Specifically, naloxone is used in opioid overdoses to counteract life-threatening depression of the central nervous system and respiratory system, allowing an overdose victim to breathe normally. Naloxone is a nonscheduled (i.e., non-addictive), prescription medication. Naloxone only works if a person has opioids in their system; the medication has no effect if opioids are absent. Although traditionally administered by emergency response personnel, naloxone can be administered by minimally trained laypeople, which makes it ideal for treating overdose in people who have been prescribed opioid pain medication and in people who use heroin and other opioids. Naloxone has no potential for abuse. Naloxone may be injected in the muscle, vein or under the skin or sprayed into the nose. https://harmreduction.org/issues/overdose-prevention/overview/overdose-basics/understanding-naloxone/

As a concerned citizen, Charles has discovered that these life-saving options are not always available to those needing assistance. Although Waitsburg's District #2 carries naloxone and has on AED, Walla Walla County Sheriff's deputies do not currently carry AED devices in their vehicles. The deputies do carry naloxone, but there are mixed messages as to whether the medication would be administered to members of the public. In a discussion with Mr. Charles, Sheriff Crider stated that naloxone was for use by the deputies if they came into contact with narcotics and not for use on citizens due to concerns about an aggressive or combative response from the victim.

Former Walla Walla County Sheriff's deputy and current Waitsburg City Councilman Jim Romine stated at the Open House meeting that deputies "used to have them (AEDs) but we had difficulties replacing the batteries."

Additionally, at the recent Open House, Commissioner Todd Kimball stated that "...deputies have told me directly that they do not want to use Narcan because it puts them in danger."

Walla Walla County Undersheriff Joe Klundt expressed a slightly different account of the deputy's use of naloxone but reiterated that the vehicles do not carry AEDs.

"It has been documented that there is a substantial risk that the subject will come out in a violent or aggressive mood," (once naloxone has been administered) remarked Klundt.

Klundt elaborated, stating that "A deputy is not required to use it (naloxone) on a suspect but it's an option at the individual officer's discretion. It is more for an officer's safety or survival." "It is not in the policy that they (deputies) shall, but they can." Klundt continued.

The Times reached out to Walla Walla nonprofit organization, Blue Mountain Heart to Heart (BMH2H) for more information about naloxone and its use. BMH2H is a community-based organization whose mission is to promote public health with advocacy, education, and harm reduction. The organization also addresses opioid addiction and prevention strategies, including free anonymous needle exchanges and free naloxone kits.

Executive Director Everett Maroon stated in an email that "my office supplied many of our regional law enforcement agencies with naloxone, with the understanding that those officers and deputies would use the medication in the field if another rescue possibility were not available, say for a deputy who has no partner on duty and who knows that the paramedics are many minutes away. The idea that a deputy may be "afraid" of reversing someone's overdose is chilling and confusing to me."

BMH2H also operates a syringe service program in Walla Walla and Kennewick where they give naloxone kits for free to the public, under a standing order from a local physician. "To date we have given out 497 naloxone kits to laypeople this year and had more than 150 overdoses reversed, as self-reported by our program participants. Blue Mountain Heart to Heart has had a naloxone program since December of 2014, and naloxone has been used 454 times to reverse overdoses locally," said Maroon.

Additionally, Maroon noted that "The State of Washington's Health Officer recently established a statewide standing order for all pharmacies in the state, so they are now able to sell naloxone without a prescription to anyone who asks for it. Naloxone from Blue Mountain Heart to Heart is given out free of charge."

While there is an increased availability for naloxone, the cost and access to an AED unit is more problematic. The devices range in price from $1,200 - $1,500. The batteries typically need to be replaced every five years, and the connecting pads after each use. Training units that guide their use are available from $400-$600.

The American Red Cross also offers AED training programs. The cost for 8 people to be trained in Adult and Pediatric CPR/AED is $1,050; each additional person would cost $100. This total cost includes a $250 onsite delivery fee for one training class; any additional training classes would incur $250 fee per class. Other training opportunities are available through the American Safety & Health Institute.

Columbia County Health Department Program Coordinator Chelsea Eaton researched the costs of AED's for the Dayton area in 2018. The organization received a grant for $6,000 from Puget Sound Energy Foundation to purchase AEDs, along with replacement batteries and pads for the ones already in use, and for training personnel in how to use them in real life situations.

Eaton found that there were AEDs in place at Ski Bluewood, in the county courthouse, at the senior center and in the lobby of the Sheriff's Department. With the grant funding she placed new devices at the county fairgrounds, at the golf course, and at The Club.

The Waitsburg Times will be continuing to follow this story and to update its readers on these issues.

When Help is Needed

A Waitsburg 911 call goes to the dispatcher, which communicates with Waitsburg Fire District #2 volunteers , concurrently with Columbia County Fire District #2 located in Dayton, WA. Both of these units would respond if available. If the call is of a life-threatening nature, or if the Dayton crew is unavailable, a crew from the City of Walla Walla Fire Department would be dispatched. Currently Fire District #2 does not transport patients to area hospitals, they must wait for a Dayton or Walla Walla crew to transport them either to Dayton General Hospital or Providence St. Mary Medical Center in Walla Walla.