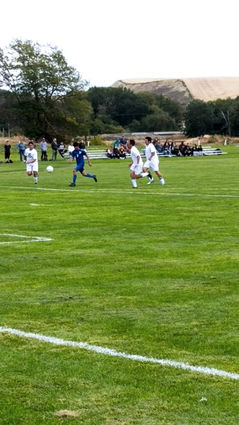 #3 Jayson Castillo breaks away and scores the third goal of the game.

Prescott – Tuesday September 17th Prescott High School played Irrigon High School in their first home soccer match of the year. Jaime Escalante scored the first goal of the game to give the Tigers the lead. The next three goals of the half were all scored by Tiger Jayson Castillo. Three consecutive goals by a player is sometimes called a natural hat trick. Jayson would go on to score two more in the 2nd half for a total of five on the game. Five goals in soccer has a special name, it's called a "glut" which seems like an appropriate term. Tiger's Omar Velazco, Emmanuel Sanchez, Miguel Aya...