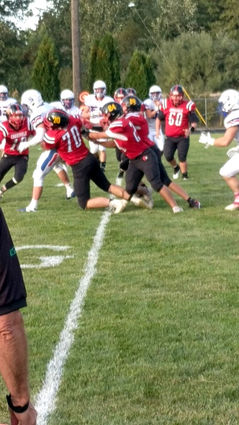 #70 Tayven Seney stops the 2 point conversion in its tracks early in the 1st quarter.

Dayton-The DW Cardinals hosted the McCall-Donnelly Vandals Friday September 13th in a non conference matchup. Initially this game wasn't supposed to be on the schedule but McCall-Donnelly had a late cancellation. Head coach Troy Larsen was happy to get another home game on the schedule even against an opponent other area teams weren't willing to play. DW would lose by a score of 68-0 but that doesn't tell the whole story.

The Vandals are a division 2A team from Idaho currently ranked 4th in the state while Dayton-Waitsburg is a division 2B team. The Vandals opened their season against ano...