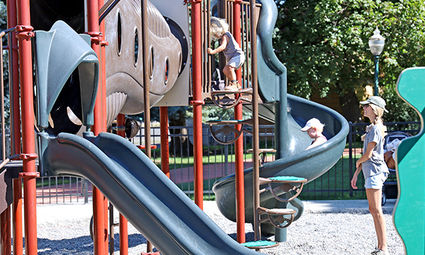 Dayton's Caboose Park, to be dedicated on Sept. 20, is a proud addition to Dayton's downtown corridor. Amanda Speraw watches as son Ezra navigates the playground. Maggie Parsons takes a trip down the slide as Dad DJ Parsons (not shown) supervises.

DAYTON-"The start of a playground kicked off one idea, which led to another, which led to a beautiful town center for all to use," said Dayton Development Task Force (DDTF) Chair Bette Lou Crothers.

Caboose Park has been several years in the making and started with a desire by former task force member Cara Watts, to build a small playground in the empty lot near the caboose at the Dayton Historic Depot.

From there, the project continued to bloom and grow. A public restroom was added in 2016. In 2018 The DDTF was awarded a $65,000 grant from Sherwood Trust to develop a park which included a...