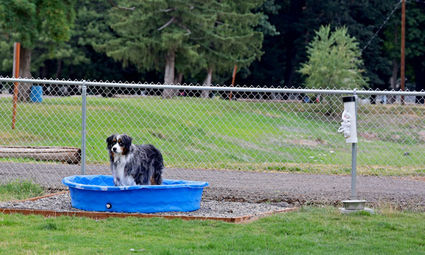 Australian shepherd, Wrecks, takes a dip in the new pool.

DAYTON-The Dayton Dog Park has been a godsend for Dayton's four-legged friends and their owners, since it officially opened in Sept. 2017.

The early morning hours, and the hours after supper are a testament to its popularity, said Charlie Oribio, the Friends of the Dayton Dog Park's (FDDP) board chairman, who is also a happy Labrador owner.

Oribio said during the summer months it is common to see four or five people, and their dogs, in the park, on any given day.

Since its inception in 2017 good things continue to happen for dogs and dog-lovers. Dogs now have their very own swimming pool and dog owners can relax at two new picnic tables.

The tables could get a work-out during the upcoming dog park celebration barbeque which is planned for Aug. 24, from 4-6 p.m.

The FDDP and the Dayton Kiwanis will provide the food, and local veterinarian Kennie Reeves, staff from the Blue Mountain Humane Society, dog groomer Darbi Yates, and City of Dayton Mayor Zac Weatherford will be on hand with information to share. Darcy Bell will provide dog training demonstrations, as well. The FDDP are also giving away one hundred toys for dogs. 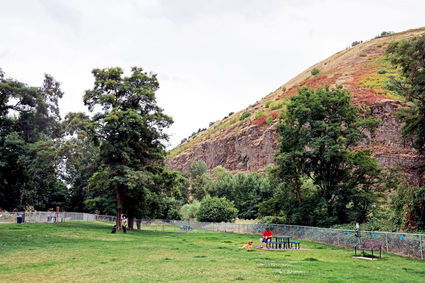 Dayton's dog park (top left) , which was opened in late 2017, continues to add new amenities to meet the needs of its visitors.

Volunteers have contributed mightily to creating the park, and the city has played a major role, Oribio said. The city originally supplied dirt for the site, and the city crew levelled it, installed the irrigation system, and planted the grass.

The park was funded through grants, private donations, and fundraisers. Oribio said the FDDP hosts an annual Puppy Photo Shoot, which yields around $500 each year, and they get paid to be ticket-takers at the Demolition Derby during All Wheels Weekend, which yields another $400 annually.

Oribio said the Broughton family donated $500 this year. Donations will be accepted during the BBQ celebration, as well.

Oribio wants to remind people that dogs must be on leashes going from cars to the park, and owners are required to clean up after their dogs.

Otherwise, come with your furry friends and enjoy the evening!