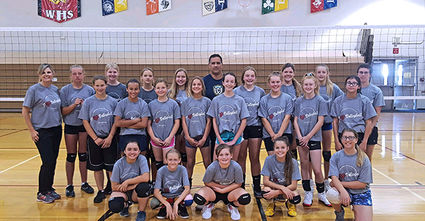 Camp organizer and middle school head volleyball coach Wendy Richards said she reached out to several colleges and universities and is grateful for Helm, who has more than 30 years of coaching experience, who was the only one willing to provide the home camp.

The coaches have offered open gyms throughout the summer which have been have been well attended.

"We have had an impressive turnout during our summer program of determined young ladies wanting to improve their volleyball skills and build a strong team. We met twice a week for the months of June and July, with a few scrimmages with Prescott. High school volleyball athletes not only had an opportunity to have a home camp but had an opportunity to attend the very first Whitman Team Camp at Whitman College," Brenner said.

Both coaches encourage any girls interested in playing volleyball to get signed up.

"We want to encourage the girls to join us. We love the sport and we love to teach," Brenner said. "These girls worked hard on improving their game and showed great leadership among the other teams that attended, which included WaHi and Touchet. We will have an exciting lineup of athletes this year and encourage the community to come to all the home games and support these hardworking student athletes," she added.