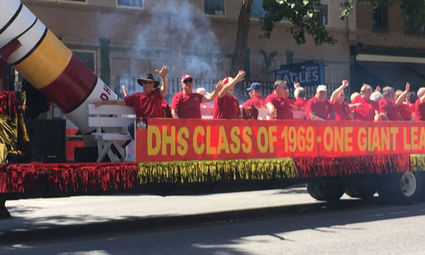 Dayton High School's Class of 1969 gathered over the weekend of July 19-20 for its 50th reunion. Of 59 surviving classmates, 40 attended festivities at Dayton's Touchet Valley Golf Course and the annual Alumni Parade. Since the parade occurred on the day of Apollo 11's historic landing on the moon 50 years ago, it was decided to make that the theme for the float and the weekend. A rocket adorned the float as did banners proclaiming the class as "one giant leap for Mankind."