By Michele Smith
THE TIMES 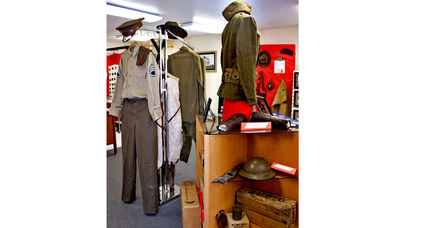 Patriotic displays honoring local veterans have been moved from the Smith Hollow Country Schoolhouse museum to the Palus Museum at 426 E. Main Street to make the popular display more visible to the public. Vintage uniforms from the Spanish-American to Vietnam wars are hanging in the Palus Museum.

Moisio said the BMHS is collaborating with the Frank E. Bauers American Legion Post # 42 to honor local veterans who have served the nation. The expanded collection of items from local veterans range from the Spanish-American War to the Vietnam War, and includes uniforms, medals, pictures, and more.

The display originally started as a gesture to mark the 100-year anniversary of the inception of World War I.

"We wanted to honor the American Legion, along with the men and women who have served our country," Moisio said.

Other items of interest at the Palus Museum are the Palus Indian Display, Lewis and Clark items, and displays depicting pieces of Columbia County history, which are housed in an adjoining section of the Palus Museum building.

At the Smith Hollow Country Schoolhouse, located at 113 Front Street, visitors can write or draw on genuine slate chalkboards, pump the pedals and hear a tune on the player piano, or type a few lines on a manual typewriter, Moisio said.

Moisio said the first schoolhouse was built in 1875 and that structure was replaced by the current structure in 1900. 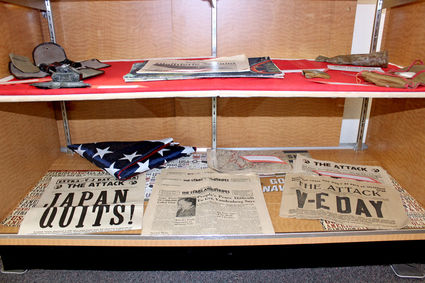 Newspapers, medals and pictures are part of the patriotic display.

In 2010, it was moved from its original location in the Smith Hollow School District, about eight miles north of Dayton, to its present site, and restoration was begun.

The Dodge Quarantine Cabin was built in 1898 by John and Mary Dodge for use by their son, returning Spanish-American War Veteran Pvt. Wesley Dodge, as he convalesced from illness.

It was located in the backyard of a home on Richmond Street and the BMHS had it moved to the Smith Hollow Country Schoolhouse property in 2017.

Both museums will be open to the public from 1-4 p.m. on Fridays and Saturdays through November.

More information can be found at the Blue Mountain Heritage Society website at http://www.bluemountainheritage.org