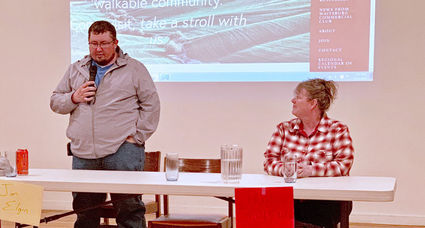 Jim Elgin addresses the audience as Pam Chapman looks on.

WAITSBURG-It was a good turnout for Waitsburg's City Council Candidates Forum at Town Hall on Mon., March 25. All candidates were in attendance except for Marty Dunn who is running unopposed for mayor.

Jim Davison facilitated the evening. Candidates were asked to share briefly why they were running for council and what they hoped to accomplish. Introductions were followed by a meet-and-greet with the audience.

First-time filer Pam Chapman said she appreciates diversity in representation and would like to see another woman on the council. She would work to ensure transparency in government, hopes to bridge the gap between citizens and council and would work to bring new businesses to town.

Jim Elgin, also a new candidate, said that sitting on council is a way for him to be an active part of a community that he loves. Elgin said he would also like to fill the gap between citizens and council and wants to make sure community members feel listened to, even if decisions don't go their way.

Incumbent Terry Jacoy said he ran for council when his water bill continued to climb. Jacoy also said he disagreed with the former council's quick dismissal of the Nestle water bottling proposal that he felt could have expanded the City's tax base, saving citizens money on services. His goal is to see that taxpayers get the best price for services for their money.

Incumbent K.C. Kuykendall continues to run for council because he believes citizens should be actively engaged in helping create a healthy community. He says he will consider all community input in making decisions. Kuykendall sees current priorities as obtaining funding to upgrade an inadequate water system on the east side of town and wants to continue working with Parks and Recreation District formation to help with the fairgrounds and to keep the pool open. 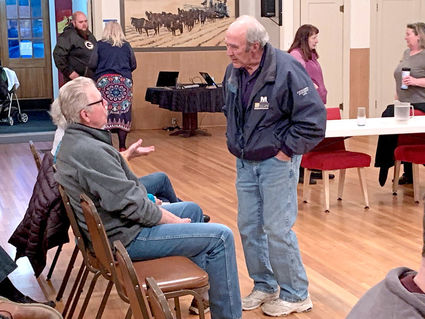 Incumbent Jim Romine said he is running again because he has unfinished council business he would like to see completed. He will continue ongoing work on the City's emergency management plan and is concerned about the loss of local ambulance service. He is also concerned about City Hall renovations, road and sidewalk renovations and the need to bring new business to town.

Incumbent Kate Hockersmith said she has always been oriented toward community service, especially as it impacts children. She wants to continue her work on the City's emergency management plan and feels strongly about preserving the history associated with the fairgrounds. Hockersmith said she wants the community to determine the values and characteristics that make Waitsburg, Waitsburg, so that it doesn't just become a suburb of Walla Walla. She would also like to continue her efforts toward downtown revitalization.

Registered voters may vote for up to five of the seven candidates. Ballots may be delivered to City Hall by 8 p.m. on April 1 or must have a postmark of April 1 or prior. The top five vote-getters will be appointed to council.