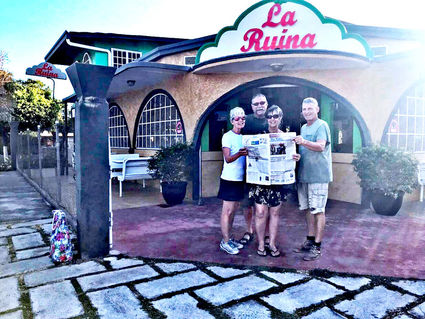 Reading The Times in front of La Ruina in Panama are Waitsburg Mayor Marty Dunn, his wife, Becky, former Waitsburg School Superintendent Carol Clarke and Frank (La Ruina's owner).  During a recent visit to Panama, the Dunns and Carol wandered the streets of Nueva Gorgona and found this wonderful restaurant run by a retired American Army veteran and his Panamanian wife.  The original Gorgona was near the Gamboa Rainforest on the Chagres River (just a few miles from where Carol currently lives).  During the building of the canal, a dam was built across the Chagres River.  In 1913 when the canal was completed, the original Gorgona was flooded to create the Gatun Lake, a major part of the Panama Canal. The President of Panama founded the new town, Nueva Gorgona to resettle the over 1,000 people who were displaced by the flooding.    During WW II, Panama created an agreement to allow US military forces to lease the area called Nueva Gorgona (as well as about 130 other sites) for the purpose of defending the Panama Canal.  La Ruina's owner shared that  the building which houses the restaurant served as operations headquarters for Fort Gorgona.