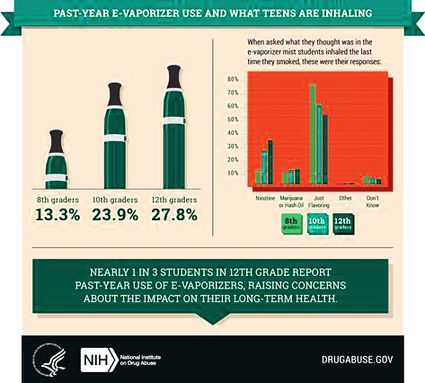 Studies show that many teens are unaware that vaping tools contain highly addictive nicotine and instead believe the juices are just flavorings. E-cigarettes are more popular among teens than cigarettes. They were first developed in China to help people stop smoking, but the juices contain up to 24 mg. of nicotine. New to the scene are products containing nicotine salts which contain between 40-60 mg. of nicotine.

DAYTON-"They make them in fun, flavored colors. They are very easy to use and are very discreet, too," said Chelsey Eaton, a county public health program coordinator.

Eaton was talking about "vaping," or smoking e-cigarettes, and why that practice isn't as harmless as it appears.

Eaton said e-cigarettes were first developed in China to help people stop smoking and they arrived in the U.S. in 2007.

"At that time they were using simple juices. They weren't yummy. They weren't colorful," said Eaton, pointing to an array of attractive devices, some in the shape of pens or erasers, and to the nicotine solutions referred to as "juices," which are used in the devices for vaping.

The juices have attractive names like 'Taste the Rainbow' and 'Afternoon Delight,' Eaton pointed out.

"It has been found that nicotine is one of the most highly addictive substances in the world," she said.

For instance, one pack of cigarettes contains 59.9 mg of nicotine, which is enough to kill an adult. Some of the e-cigarette juices contain up to 24 mg, she said.

New on the scene are products containing nicotine salts, which have between 40-60 mg of nicotine in them.

Eaton said these products are so new that much is unknown about them, including where they are manufactured and what ingredients are in the juice. She said one compound used in a solution mimics the buttery flavor in popcorn, but has harmful consequences when vaped.

"It is okay to eat. It's okay to digest, but the second you turn it into a vapor, it turns your lungs into popcorn," said Eaton. "It literally pops your lungs."

Nicotine can affect the learning, memory, and attention centers in the developing brain, she said.

So far the FDA has not regulated e-cigarettes and their nicotine solutions, other than to say they cannot be sold to people under the age of eighteen.

Obtaining them is easy, Eaton said.

"You can order them online," she said. "You can go to PDQ and buy them."

This spring the health department plans to conduct a survey of all the local stores to gain a better understanding of their protocol in selling them and to educate store owners and clerks about the legal aspects of selling e-cigarettes.

Eaton said she met with a group of Dayton High School teachers, in January, to share information with them about e-cigarettes and their harmful effects.

"They were surprised and inquisitive," she said. 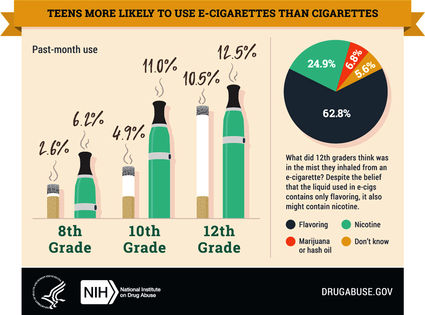 Studies show that many teens are unaware that vaping tools contain highly addictive nicotine and instead believe the juices are just flavorings. E-cigarettes are more popular among teens than cigarettes. They were first developed in China to help people stop smoking, but the juices contain up to 24 mg. of nicotine. New to the scene are products containing nicotine salts which contain between 40-60 mg. of nicotine.

Because of their discreet appearance, and the fact there is little noticeable vapor from the devices, there is a strong likelihood they won't be detected by staff during school hours, or at home, by parents. And because nicotine is a central nervous stimulant, vaping to deal with anxiety, depression, or to deal with problems at home, or at school, is counterproductive, Eaton said.

"They are thinking about feeling good for the next ten minutes, rather than how they will feel tomorrow," she said.

There is help for youth, who want to kick the habit, and for parents, who suspect e-cigarette use.

"Definitely, kids are going to be more apt to talk about it if parents are approachable," said she.

Eaton said exploring the underlying reasons for e-cigarette use is worthwhile. Parents and youth can reach out to school staff, seek counseling services with Blue Mountain Counseling, or seek services through the Dayton General Hospital.

She said there is also a private counselor operating out of an office at the Port's administration building.

There are online resources as well. Eaton said youth can find apps, a set of guidelines for quitting, and a texting service to help them at: Youth Smart Quit.com.

Information is available for parents who suspect nicotine addiction at: The Tobacco Talk.com.

Another good source of information for both parents and youth can be found at: The Truth Initiative.com.