Marci Perkins, developer of Waitsburg Business Center, has Business(es) of the Year 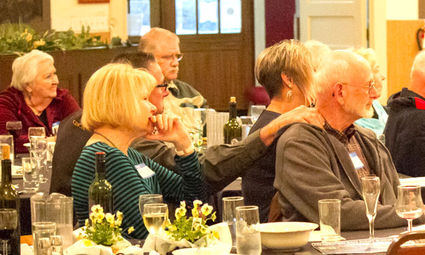 WAITSBURG – The late Tom Baker has held the honor of awarding the Waitsburg Commercial Club's Community Service Award for many years. While he wasn't present in body this year, he was very much present in spirit, at the May 16 award ceremony, where Jim Davison received the Community Service Award and Marci Perkins was awarded Business of the Year.

Prior to reading their nomination letters, Joan Helm placed a pair of Tom's shoes on a table next to the podium, and commented that it would take three of them, Deanne and Larry Johnson and herself, to try to fill them.

Larry gave a nod to Tom when he took the podium, flashing a pair of Tom's patriotic suspenders loaned to him by Tom's wife, Anita, and introduced his speech with some traditional Baker one-liners.

"Knowing Tom liked figures, this one caught my eye. I just read that 4,153,237 people got married last year. Not to cause any trouble, but shouldn't that be an even number?

"Politicians and diapers have one thing in common. They should both be changed regularly, and for the same reason.

"Today a man knocked on my door and asked for a small donation towards the local swimming pool. I gave him a glass of water," Johnson quipped to the appreciative crowd.

Deanne Johnson introduced this year's Community Service Award recipient, Jim Davison, who has lived and volunteered in Waitsburg for 48 years. Jim and his wife, Pat, moved to Waitsburg in 1969 with plans to stay for just two years, she said.

He had just graduated from Eastern Washington College, with a vocational certification to teach business classes. But Waitsburg schools were a great fit, and he stayed for 36 years, teaching at various levels. Davison is probably most remembered for his many years as the high school driver's education instructor.

He is a past president of the Waitsburg Teacher's Association, having held that position for about 15 years.

During the 1980s, Jim became a reserve deputy and worked with the Waitsburg Marshal, assisting on calls and filling in on shifts. He presently serves on the Civil Service Commission for the Walla Walla County Sheriff's Office, Deanne said.

Joan Helm took the podium to thank Jim and Pat for their roles as advisors to the Presbyterian youth group where they helped plan activities and assisted with the annual pizza fundraiser. Jim also served as a member of the Presbyterian session, and financial secretary.

"Have you ever looked at the sign on the Presbyterian Christian Ed Building? Our nominee made this sign using a wood burning technique. Of course, he wanted to do this with no recognition, as that is his style," Helm said.

She shared that Davison served multiple times on the Waitsburg City Council, and served one year as mayor. He also volunteered as a driver/EMT with the Waitsburg Ambulance Service.

In 2012, Davison became involved with upgrading the high school football press box, and spent many hours on the project. He was awarded 2012 WHS Booster of the Year for his involvement with that project.

Larry Johnson spoke next. After retiring from teaching, Davison went to work for the local Farm Bureau. After that position was phased out, a friend talked him into joining the Walla Walla Columbia School Retirees Board of Officers.

"He represents the unit as the legislative committee chairman. He does an excellent job of keeping the members informed of legislative issues. Members from all over the state have asked to receive his informative emails," Larry said.

He said that Davison presently serves as secretary of the Waitsburg Town Hall Board, is a member of Waitsburg Celebration Days Board, and is chairman of the WCD Kiddie Parade. He has volunteered at the Fort Walla Walla store, and he and and Pat serve as superintendents of arts & crafts at the Columbia County Fair.

"Our nominee usually volunteers and serves as a silent worker. However, in his spare time, he often writes letters to the editor, providing the state and local governing bodies expert advice as to better perform their duties. This is the one activity that forces him to identify himself. He does not seek recognition, however.

"We believe that it is time to recognize and thank him for his many years of service to the Waitsburg Community and Touchet Valley," Larry Johnson said. 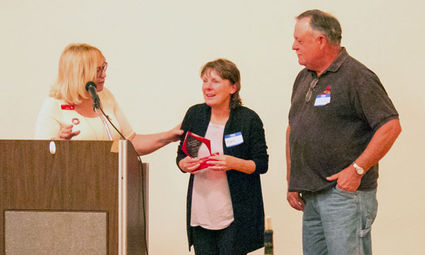 Commercial Club President Joy Smith awards the 2017 Business of the Year award to Marci Perkins, with her husband, Lyle.

Perkins sits on the Commercial Club executive board, and Smith said Perkins is often the person she turns to for help when it is needed.

Perkins, with the help of contractor husband, Lyle, renovated and saved the former Waitsburg Clinic Building, turning it into the Waitsburg Business Center. Perkins readily makes her conference room available to Waitsburg organizations, such as the Waitsburg Celebration Days Committee and the American Legion Auxiliary.

"Marci has committed her time to many organizations, including the Commercial Club and St. Mark's Church. She shares her resources with gracious goodwill and serves as a partner between the community and business," Smith said.

See a list of past Community Service and Business Award winners on Page 5.