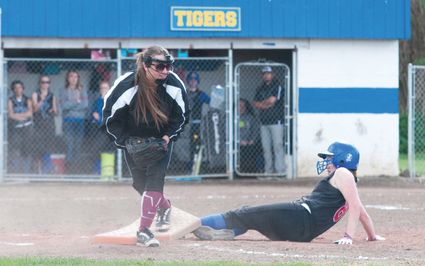 PRESCOTT - After falling hard to Touchet (5-1) and Connell (15-5) earlier in the week, Dayton made a strong comeback in Saturday's double-header against WP, taking the Tigers 13-1 and 11-1, respectively.

"The girls played solid defense and successfully put the bat on the ball. They got at least one hit in all but one inning. They put runs on the board in all but two innings. This is big for us --consistency was key on Saturday and everyone contributed," said Bulldog Assistant Coach Desirae Jones. "Lexus was very focused in the circle, even coming back in to finish up two innings in the second game. Madison also threw great for four innings in game two. Taylor Frame had 5 RBIs for the day," said Jones.

WP didn't fare as well against 'Dawg pitcher Lexus Ward who had 10 strikeouts and zero walks in game one. The Tigers made only two hits in the first game and three in game two. "Offensively we weren't in the game. We didn't read the pitches and struggled to make contact. We've got a lot to work on before we finish up the season and get ready for the district tournament," said WP Coach Angie Potts.

WP faces Boardman in Prescott on April 29 and SJELW at home on May 3. The Tigers take on Tri-Cities Prep at the TRAC on May 2 and GPTO at home on Monday.