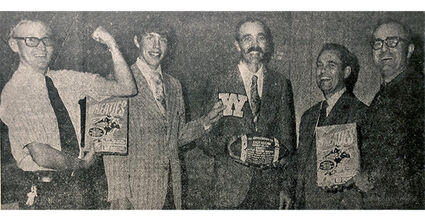 A lifelong dream has come true for Waitsburg High School student Beka Adams. Ever since she was a little girl, Adams said she dreamed of being part of the Walla Walla Fair and Frontier Days royalty Court and now, at age 16, she beat out the competition for a spot. Adams, the daughter of Ann and Lanny Adams, said her biggest influence in being on fair courts was her older cousin who was Miss Pro West in the 1990s. “She was my inspiration,” Adams said.

The Floods of 1996 hit Waitsburg especially hard and those traumatic days provided a local group of FFA members with a topic – the use of bioengineered elements in flood-prone areas – to explore in the Agricultural Issues events, one of FFA’s many career development opportunities. The Waitsburg team captured district and state events last spring, and competed last week at the national event at the 70th National FFA Convention in Kansas City, Mo. The team, representing Washington, drew an especially tough night and ended up virtually tied with Texas before being bumped from further competition when judges opted for the Texas team. The Waitsburg group – Jane Conover, Christy Baker-Smith, Erica Lambert, Wendy Jones, Anne Bickelhaupt, Beth Abbey, Kelly Thomas, Kelly McCaw and Amanda McKinley – were placed among the Silver Emblem teams. All are juniors at Waitsburg High School.

[Photo Caption] Waitsburg Lions Club presented each coach, and Jack McCaw, with a box of the “Breakfast of Champions” for the league-winning Cardinals. A game ball from the Pomeroy contest, first played under Waitsburg’s new lights, was presented to Jack McCaw. He was named honorary team captain for his work as lighting committee chairman. Pictured are coach Sandy Jetton, Guy McCaw, Jack McCaw, coach Al DeCoria and coach Wayne Henderson. The football team were guests of the Lions.

The floor is being laid for the new gymnasium. Shipment for the playing floor was received on Monday, Nov. 12, workers began installing the floor the following day with work expected to be concluded in about two weeks.

Six seniors are among the first ten of the basketball team this year. They include Wes Leid, Bob Abbey, Rich White, Jack Cyr, Jim Wood and Ken Finch. Other returning lettermen are Jim Hofer, Mike White and Gary Thomas, all juniors.

The Willing Workers met at the home of Mrs. Mack Taylor for a social afternoon a few days ago. After a discussion of the details of the coming bazaar, luncheon was served. Assisting the hostess was Mrs. Sarah Wallace, Mrs. H. W. Beckley, Mrs. James Archer and Mrs. J. W. Warren.

Theo Bachmann and wife, who have been farming near Tekeo for this past couple of years have moved down to this section of the country again.

The public sale of mules held at the Breeze Brothers barn near the Main Street bridge by Hinchliffe Bros. Saturday afternoon, was fairly well attended.

Another of our popular young men has gone and got married. This time it is Alvan J. Loundagin, better known as Pete, and the happy bride is Miss Addie Roe, one of Dayton’s fairest daughters. The marriage took place Sunday afternoon, November 14 at 5:00 o’clock at the residence of the bride’s parents, Mr. and Mrs. Oliver O. Roe.

Born in this city, Thursday, Nov. 18, 1897 to F. A. Fender and wife, a daughter. Mr. Fender is bearing the dignity of fatherhood with becoming grace.