Miller and Helm win their respective races in Columbia County 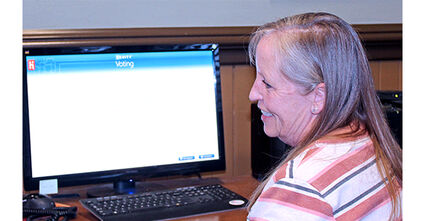 On Monday afternoon, Cathy Abel prepared to count the remaining 260 ballots from the Nov. 8 General Election. Abel is the Interim Auditor and Election Supervisor in the County Auditor's Office.

COLUMBIA COUNTY-Jack Miller has defeated the incumbent Charles Amerein in a tight race for a seat on the Board of Columbia County Commissioners, representing District 3. Miller garnered 51.95 percent of the vote, narrowly defeating incumbent Amerein by 89 votes.

Sheriff Joe Helm has defeated Deputy Jeff Jenkins for his next four-year term as Sheriff in Columbia County. Helm received 61.95 percent of the vote.

Former County Auditor Anne Higgins resigned from the auditor's office last August, after the deadline to be removed from the 2022 ballot. Though not running, Higgins remained on the ballot and received 79.7 percent of the vote and will need to resign again. It will then be up to the local Republican party and the Board of County Commissioners to appoint an interim auditor.

Tammy Groom Ketterman was the lone candidate on the ballot and won the position of County Assessor with 98.36 percent of the vote. She is currently serving as the Interim Assessor. Her first four-year term will begin on Jan. 1, 2023.

County Treasurer Carla Rowe and County Prosecuting Attorney Dale Slack ran unopposed in the general election, and they have each been re-elected. They will both serve four-year terms beginning on Jan. 1.

Proposition 1 for creating The Columbia County Joint Metropolitan Park District failed to pass. The vote was 757 for and 1,268 against the Proposition.

Columbia County has 13 voting precincts and 2,856 registered voters. Voter turnout for the 2022 General Election is 77.1 percent, higher than the estimated statewide turnout of under 60 percent.

A total of 2,202 ballots have been counted. There are roughly ten ballots that will need oversight by the election canvassing board before the election can be certified on Nov. 29.