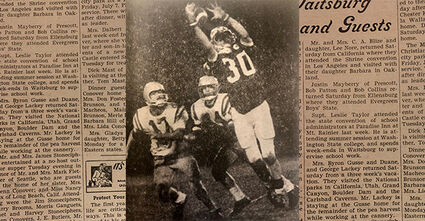 Local veteran Owen Agenbroad fought with the U.S. Marine Corps and served as a message carrier on the front lines at Iwo Jima. “I don’t consider myself a hero, I did what my country asked me to do,” Agenbroad said. “We left the heroes there.” Agenbroad recounted some of his time during WWII after he landed on the island on Feb. 19, 1945. His company was the fifth-wave assault battalion where they fought for 37 days. Agenbroad, who was 21 at the time, said his company was made up of about 250 people and 65 to 75 percent of the group didn’t return home.

Four Waitsburg High School graduates who went on to fight and die in World War II were remembered by students of Waitsburg Schools at a special school assembly Monday. The ceremony, held in observance of Veteran’s Day Tuesday, Nov. 11, included the dedication and presentation of a plaque honoring the supreme sacrifice made by the four – 1st Lt. Tony Lloyd, Class of 1934; Lt. Merle Eaton, Class of 1939; 2nd Lt. Merwin Laufer, Class of 1941; and PFC Bobby Pettichord, Class of 1943. The local Veterans of Foreign Wars Post 7021 is named in Pettichord’s honor. The ceremony included speeches by Helen Campbell and Ivan Keve, both veterans of WWII. Campbell and Keve, members of Samuel W. Southard American Legion Post No. 35, accepted the plaque on behalf of the men and their families.

The Waitsburg progressive Club met at the home of Mrs. Robert Pollard at the Lewis and Clark Trail Park. Mrs. Gretchen Mikkelsen of Walla Walla was assistant hostess.

Patricia DeVaney, a junior transferring from Tekoa, is the 90th student to enroll in high school this year.

Miss Dorothy Adams, assistant postmaster, returned Wednesday from Portland, where she has been visiting friends for the past week.

L. Young who has been planning to make the woods ring, left us last week for Walla Walla hoping to find something easier done than chopping wood. We think most wood cutters will say he used a wise head if he can find something.

There arrived at the home of Mr. and Mrs. A. Hanson on Nov. 10th a nice 8 ½ pound girl, they have named her Ruth Evelyn.

H. M. Hoover and family will leave on Sunday night for a visit to friends and relatives in Pennsylvania. They intend to remain all winter.

A private dance, under the supervision of Al A. Simmons and Chet Babcock, is to be given at the Armory Hall on Saturday night.

O. B. Smith of the Star Grocery has purchased a Gramaphone and has it on exhibit in his store. The instrument is much simpler in its construction than the phonograph but for force and distinctness it is ahead of any phonograph we’ve ever seen.