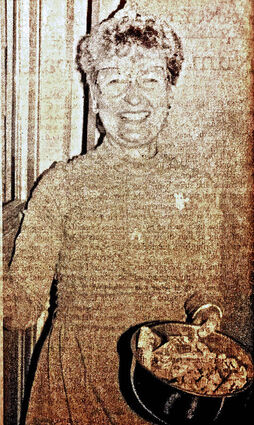 Dayton’s First Congregational Church bubbled with activity last Friday as community members and volunteers filed in for the annual Dayton General Hospital Auxiliary Luncheon. The Dining areas filled quickly as attendees greeted each other like old friends, making the entire event feel more like a family reunion than an annual fundraiser. The feeling is exactly what keeps luncheon organizer and auxiliary President Aleta Shockley coming back. “My favorite part (of the luncheon) is seeing and meeting old friends,” Shockley said. Shockley said she has been part of the luncheon for years and she was happy with how it turned out.

[Photo Caption] B.A. Keve, a.k.a. “The Halloween Queen,” is especially joyous on October 31 – it’s her birthday. As a little girl, B.A. would always be anxious to be in on what the adults were talking about. “Never mind,” they’d say, “you’ll know what we’re talking about when you’re 65.” With this birthday, B.A. said, she’s still waiting for the information!

Last Saturday evening the Prescott Blue Birds and Camp Fire Girls put on a Halloween program and pie social. This function was well attended. While the adults were bidding on pies being auctioned off by Walt Norman the children were bobbing for apples. The income from the pies was $62.00. Pie, cookies, cupcakes, punch, and coffee were served. Attending from Walla Walla was Camp Fire Executive Mrs. Nancy Bunt. Its that time of year again when the Blue Birds and Camp Fire Girls will be ringing your doorbells and selling Camp Fire mints and Toffee coated peanuts. The price this year has raised to $1.25 per box. Please help support our Camp Fire in the Walla Walla and Prescott areas. Chairman for Prescott is Mrs. Justin Mayberry with Mrs. Lloyd Olson assisting.

Mr. and Mrs. Orlie Katsel entertained at a Halloween party Friday evening with 53 guests attending including several young friends of their son, Buster. They enjoyed old-time music, games and readings.

The biggest real estate transaction of the year was put over the other day when Dan O’Connor purchased the 320-acre farm known as the Ike ODell place from H. D. Conover.

J. L. Jackson shipped seven cars of sheep this week and six cars were shipped from the Dickinson herd at Starbuck.

The Preston Shaffer Milling Co. here started grinding flour again Sunday morning after being shut down since early in June.

Ellis Laidlaw who farms on Dry Creek, raised 1500 sacks of netted gem potatoes on 8 acres of ground. These potatoes were grown from certified seed and without irrigation.

Fruit shippers of Walla Walla were in Spring Valley last week after apples. Minnick Bros. sold them 100 boxes at 40 cents a box. Apples for drying are only worth $5.00 per ton.

P. A. Preston has erected a fine marble monument at his wife’s grave. The marble came from the east and was erected my W. M. Clark of this city.

The Academy football team will cross legs with the Whitman College team a week from tomorrow (Saturday). Weather permitting.

H. C. Wade has rented a ranch near Huntsville and will move his family there soon. We wish Pete success.